I don’t have adequate words for this.[1] I am beyond furious after watching what these three Muslim teenagers did to a defenseless kid whose only crime was “Walking While White” in a Muslim neighborhood. This was in Britain, but could have just as easily been here. They are demonic beasts and should be treated as such. When they caught this boy, who had accidentally wandered into the wrong neighborhood, they viciously beat and kicked the boy. He ran to a window and pounded on it, only to have them drag him down and beat him some more. They kicked this boy repeatedly in the head. Two thugs beat him while one laughed and filmed it. He later uploaded it to Facebook. That boy surely had to get medical attention after what was done to him. 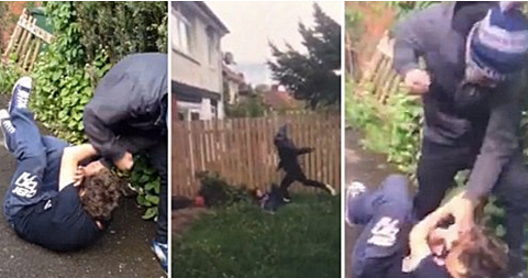 Here’s yet another example of the “tolerance” shown by members of the “religion of peace.”

Two Muslim thugs – both 13 – savagely beat a terrified 12-year old White boy who had strayed into the “wrong neighborhood”. (remember when they told us there was no such thing as Muslim “no-go” areas?).

Footage shows two thugs punching and kicking a 12-year-old boy in the head in an unrelenting and brutal attack.

The thugs kept beating the boy until people started showing up. Then they left. If no one had showed, they would have beat that little boy to death, I’m sure of it. He’s lucky to have survived that trouncing. When it was uploaded to Facebook, the Muslim youth wrote “Hahaha” and “that’s what he gets for going where he don’t belong.” Still think Islamic no-go zones don’t exist? The police did arrest the three teenagers for assault later, but they’ll get out to do it again. Next time, they’ll kill someone and laugh while they do it. Their hatred for infidels knows no bounds. I’m sure rape will be on their dance card as well. This is coming soon to America, if it isn’t already here.