The mystery of Bulgaria’s green cat is finally explained [Video]

Green always was my favorite color. This cat is almost a vibrant turquoise it looks like, or a cross between that and green. It’s lovely, but not normal. They say the color comes from the cat laying on an abandoned synthetic green powdered paint pile in a garage. The kitty seems healthy otherwise. No wonder this cat’s predicament has gone viral – his appearance is stunning and startling. Sleeping on paint cannot be good for the cat and if it is turning its coat green, I’d hate to think what it was doing to the cat overall. Pretty, but not very healthy for that cat.[1] 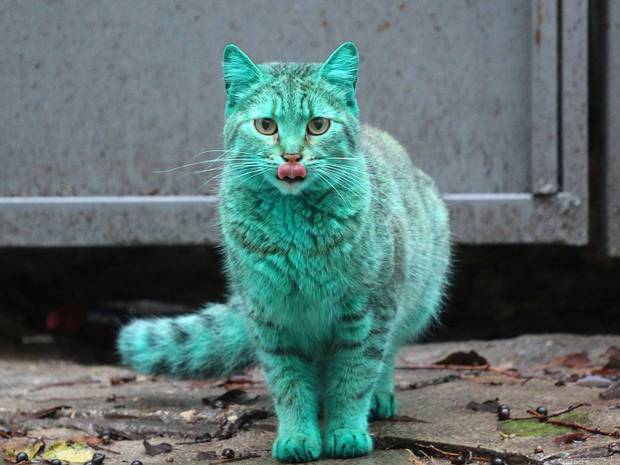 A mysterious emerald feline seen wandering the streets of a Bulgarian seaside resort may finally be explained. 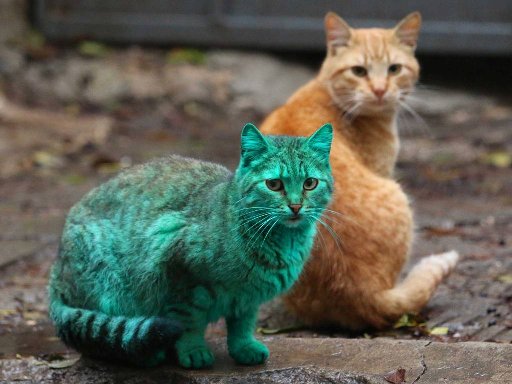 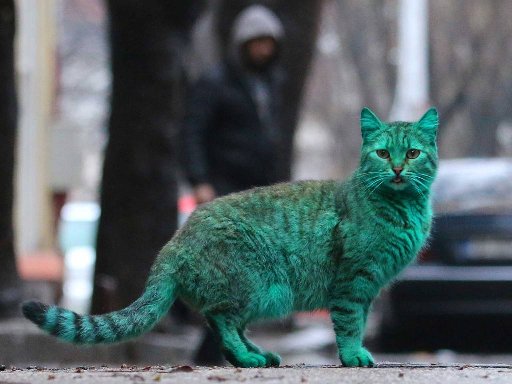 He’s been making other cats green with envy but a Bulgarian moggy’s mysterious emerald coat may finally be explained.

Locals believed that the green feline, who was first spotted in the Bulgarian seaside town of Varna, had been attacked and painted the unusual shade by vandals, even setting up a Facebook group to catch the perpetrators.

But it has now emerged that the – as yet unnamed – moggy has been sleeping on the top of an abandoned pile of synthetic green paint in a garage.

Gradually, it is believed that the paint slowly covered the entire cat – giving him his unusually vibrant appearance.

The colour also appears to show no sign of wearing off as each nap the cat takes just makes the colour stronger.

Although widely reported by local and international media, it remains unclear whether the green feline has an owner or is another stray on the Varna streets. The city is Bulgaria’s third largest and a well-known holiday resort on the Black Sea coast.

Kind of reminiscent of the yellow/orange Cheshire cat in Alice in Wonderland. Substitute the green and minus the lethality. Perhaps it is not hurting the cat – after all, most animals instinctively know when they are doing something harmful to themselves. Maybe it just likes the smell and the warmth of the pile. The dye job is a bennie. Having said that and after reading varying opinions, there is still a chance someone dyed the cat. Either way, he’s very popular and quite photogenic. Sure would like to know what happened to him.