No free speech for you kids![1] Evidently at Penn State you must first get a permit and approval to have free speech in a designated “Free Speech Zone” on campus… I kid you not. A female police officer confronted these wayward freedom lovers and put them in their place. She also told them to turn off their cameras because they were violating her civil rights. Excuse me? You are shredding their constitutional rights and then just making crap up. As a public servant, you do not have a civil right to not be recorded. Holy 1984! We can’t have Libertarian, constitutional-loving students running around on publicly funded campuses spouting freedom, now can we? With a name like Young Americans for Liberty, you just know they have to be up to no good. Thank goodness we have jack booted thugs patrolling our campuses to keep these young hooligans in line. I guess constitutional rights are now verboten. 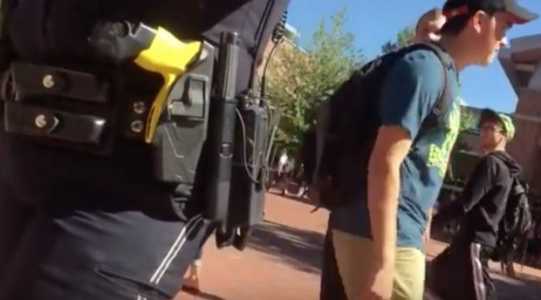 A group of libertarian students distributing free copies of the U.S. Constitution during a free speech protest held in a “free speech zone” at Penn State University Friday were confronted by a police officer and told they needed to cease their activities and first obtain school approval.

Students with the group Young Americans for Liberty were confronted by an officer who first noticed they had erected a “free speech wall” where students were permitted to write or draw any message, college news website Campus Reform reported[3].

The exchange with the officer was captured on camera by a field representative for the non-profit Leadership Institute who was on campus helping assisting the students with their event.

“Can you put your phone away for me please?” the officer asked.

“Isn’t this a public campus though?” student Kevin Caputo countered.

“But I don’t want to be recorded. I have the civil right to not be recorded,” the officer claimed.

Caputo held firm, insisting the group had the right to record the officer.

“OK, but I’m just saying I wouldn’t like to be recorded,” the officer said.

The student group was then asked by the uniformed officer if they had been asked to cease their activities. Caputo replied that they had been, but said the group chose not to because of its belief it had the Constitutional right to protest on the public campus.

The officer informed the students that they first needed to obtain permission from the public university.

“So we have to get permission to protest?” Caputo asked.

The students ultimately decided to comply with the officer.

Moments later, the officer discovered the students had also been handing out literature.

“Were you passing out things too?” she asked.

“We were. The Constitution,” Caupto replied.

“Cause that’s just the same thing, because we have a rule and regulation about handbills and passing out things, so that’s included in the permit as well,” the officer said.

According to Campus Reform, Penn State allows students to pass out literature as long as it is “distributed in person” from the sponsoring organization.

TheBlaze has reached out to the university for comment and will update this story with new information as it comes available.

These students then got smacked for handing out the Constitution to people, which they are expressly ‘allowed’ to do as long as it is distributed in person by the sponsoring organization. This is fascist. You can bet if they had been handing out literature on gays or transgenders, they would have been assisted and applauded by the university in every way possible. When this silliness started on campus, the powers-that-be insisted on “Free Speech Zones.” Now, you can’t even do that, which was the goal in the first place. Maybe it was a typo… they really meant, “Restricted Speech Zones.” And while I’m at it, what the heck is a “Free Speech Zone?” Doesn’t the Constitution apply everywhere, to everyone, at all times in the US? Or do we now have just pockets of constitutionality and only when the elitists deem we are allowed to? They should try handing out Mao’s Little Red Book, Marx’s Communist Manifesto, Mein Kampf or the Quran and see if that is accepted. Bets anyone?