This is an updated story. Thank goodness this officer will be okay.[1] He’s certainly in our thoughts and prayers. Officer Stuart was released from the hospital last week and he’s headed home now. He went to break up a fight in the Bronx and the crowd literally turned on him. One of them had a gun and shot the officer. There were other shooting altercations as well. The crowd had guns, knives and bats and they were in a violent mood. Christopher Rice tried his best to shoot officer Sherrod Stuart. 15 rounds were fired at Stuart. He returned fire and hit Rice in the neck, abdomen, thigh and hand. At the time he was in serious condition, but would probably make it. Officer Stuart is recovering nicely and will be back at it soon. He received a wound in his ankle from friendly fire. 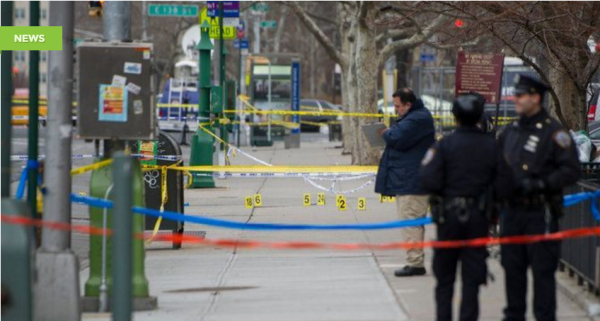 A 25 year-old NYPD cop was shot recently during a massive shootout in the Bronx.

According to New York Daily News[3], the shooting began at 2:10 a.m. after Officer Sherrod Stuart arrived on the scene of a large street fight in which combatants were armed with guns, knives, and bats. Over 15 rounds were fired as Stuart exchanged fire with cop-hating gunman Christopher Rice, 19.

Stuart shot Rice in the neck, abdomen, thigh and hand, and the thug was rushed to the hospital afterwards in serious condition. The shooting occurred only three hours after Rice was released from jail following an arrest on a fare-beating charge.

A plainclothes anti-crime unit officer, Smith was shot in the right ankle on the fourth anniversary of the day he joined the department.

Rice got into the gunfight just three hours after he was released from jail following an arrest on a fare-beating charge, cops said. At the ripe old age of 19, this guy has a death wish and he almost got it this time. Five additional stabbing victims were also taken to local hospitals as a result of the initial club fight that prompted the 911 calls and police response. As a side note, officer Stuart’s heroic uncle helped evacuate the World Trade Center PATH station before being crushed in the collapse of the North Tower. Earlier in his career, he worked for the NYPD in a Brooklyn precinct and in the narcotics division. So he comes from really good stock. Beaming, Stuart gave two thumbs up, high fives and handshakes to fellow cops as he was wheeled between two lines of dozens of cops from commands all over the Bronx when he was discharged from the hospital. Christopher Rice is now in custody at Rikers.