In a stunning timeline of events[1], one which I personally do not believe is coincidental, Obama caved to overwhelming national criticism and pressure over the terrorist attack in Chattanooga, Tennessee and the deaths of five fallen military heroes, and lowered the flags at the White House to half-staff. But he only did so AFTER Donald Trump ordered all flags on his properties flown at half-mast. Trump, who has been speaking out and for the fallen Marines and Naval officer since the horrific event took place last week, was following through on his sentiments. Obama, who had lowered flags in the aftermath of other shootings, did not and would not until yesterday. He barely even addressed the issue. In fact, the same day the murders took place, he issued an end of Ramadan message and then jetted off to fundraise and party. The next day, he went on record that he was going after the guns of Social Security recipients. But as far as lowering the flags for these heroes – nope. The logic given was that it was in a time of war and in the line of duty. What crap. It was a terrorist attack and if there was ever a time the flags should be lowered it was over that. Trump is acting more presidential than the president. I doubt that it was just about timing for Obama when he lowered those flags. 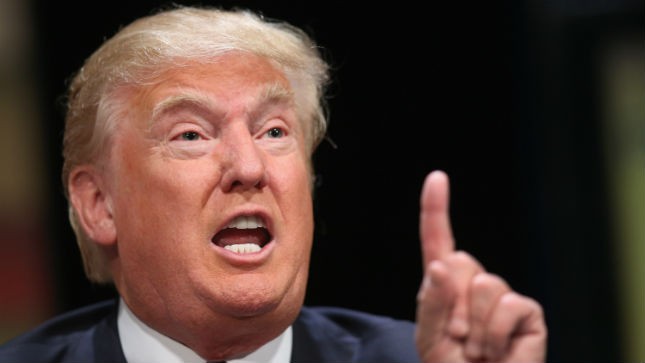 Donald J. Trump Orders Flags to be flown at Half-Mast at all Trump Properties in Honor of the Five Fallen Soldiers

(New York, NY) July 20th, 2015- Today Donald J. Trump has ordered all flags at Trump properties around the country to be flown at half-mast in honor of the five fallen soldiers who were tragically killed in last week’s shooting. Mr. Trump has long been a dedicated supporter of our military and our Veterans and if the President won’t act, he will.

Mr. Trump stated, “This disgraceful omission is unacceptable and yet another example of our incompetent politicians. It is a simple yet meaningful and important gesture that signifies our respect and recognition for these great soldiers who lost their lives. We must do better for all Americans, especially our military. We must Make America Great Again!”

In addition to the lowering of the flags, Mr. Trump has established a hotline (855- VETS- 352) and email address ([email protected]) for Veterans to share their stories about the need to reform our Veterans Administration.

If he is elected President he will take care of these and all Veteran complaints very quickly and efficiently like a world-class business man can do, but a politician has no clue.

Donald Trump said Tuesday that he has ordered flags to be flown at half-staff at all Trump properties in honor of four Marines and a sailor killed last week in Chattanooga, Tenn.

Trump also referred to the victims as “soldiers,” which refers specifically to people who serve in the Army, although it is sometimes used to describe troops generically.

In a statement on his Facebook page, Trump issued the order[3] and criticized the President Obama, who at that time had not yet ordered flags to be flown at half-staff at the White House and other public buildings[4].

“This disgraceful omission is unacceptable and yet another example of our incompetent politicians. It is a simple yet meaningful and important gesture that signifies our respect and recognition for these great soldiers who lost their lives,” Trump said in a statement.

Trump’s comment prompted backlash from at least one Marine veteran, Todd Bowers, former deputy executive director of Iraq and Afghanistan Veterans of America, who Tweeted, “Good thing he knows the difference between Marines, Sailors and Soldiers. This is embarrassing.”

Trump’s own commitment to veterans has come under question after he said last weekend that Sen. John McCain (R-Ariz.), a Vietnam prisoner of war, was “not a hero.”

Trump sought multiple student deferments during the Vietnam War, and was medically disqualified for what he said was a bone spur.

The statement on Trump’s Facebook page said in addition to lowering the flags, the candidate has established a hotline at 855-VETS-352, and an email address, [email protected], for veterans to share their stories about the need to reform the “Veterans Administration” — or Department of Veterans Affairs.

“If he is elected President he will take care of these and all Veteran complaints very quickly and efficiently like a world-class business man can do, but a politician has no clue,” it said.

Trump saw that the president was derelict in his duty in honoring the fallen and took symbolic action. It was a brilliant move politically in my viewpoint. Nit-picking on Trump’s wording is just silly. It’s obvious he supports the troops and honors our vets. He didn’t serve, but that doesn’t mean he doesn’t respect the military, regardless of what the media implies. The VA is a national disgrace and Trump has made it a priority to reform the agency. It should have been done long ago. We owe nothing less to our warriors. It’s obvious the politicians in control don’t care about the VA and our military – in fact, they despise them. I believe Trump would turn that around and fast. Trump leads and Obama follows… maybe a coincidence in timing, but I doubt it. Either way, it is massively embarrassing for Obama and disgraceful.