OMG! I just watched the video of the Obama’s[1] pretending to convey their condolences to Justice Antonin Scalia as he lay in repose at the Supreme Court yesterday. They were there all of two freaking minutes if you can believe it. And watch closely… Mooch is smirking. She then bows her head to hide a smile. The witch is literally rejoicing at the death of one of the greatest Justices of all time. Unbelievable. Obama also looks like he is repressing a smile. Then Josh Earnest would not commit to Obama NOT playing golf today during Scalia’s funeral. Disgraceful in the extreme. 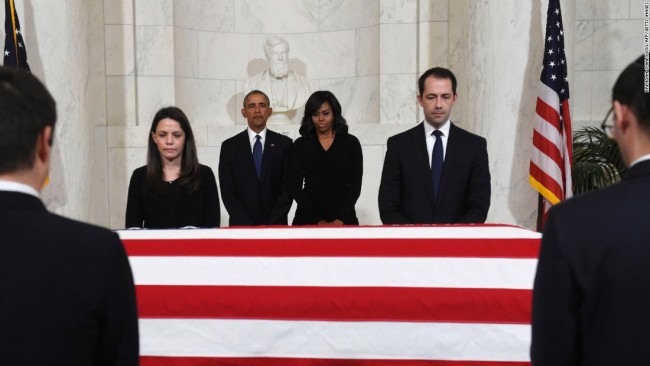 President Obama faced a tsunami of criticism[3] when the news broke that he would not be attending Justice Antonin Scalia’s funeral on Saturday, but instead would pay his respects[4] by appearing at the Great Hall where Scalia’s body would lie in repose Friday.

“Vice President Biden, who is somebody that had his own personal relationship with Justice Scalia and his family, will be representing the administration at the funeral…Given his personal relationship with the family and given the president’s desire to find a respectful way to pay tribute to Justice Scalia’s service to the country, we believe we have settled on an appropriate and respectful arrangement.”

Washington is mourning the late Supreme Court justice Antonin Scalia for the second day with a funeral mass attended by thousands, including Vice President Joe Biden, presidential hopeful Ted Cruz, and the remaining eight justices. Ted Cruz was the only candidate to make the funeral. At first he didn’t think he could make it, but Cruz just couldn’t not go. One of Scalia’s nine children, the Reverend Paul Scalia, led the procession on Saturday at the Basilica of the National Shrine of the Immaculate Conception. With a capacity for 3,500 people, the church was filled to the brim as mourners wiped away tears and laughed along with the Reverend’s highly personal tribute to his dad. Ted Cruz, a former clerk on the Supreme Court, responded to the news of the death of the conservative Supreme Court Justice Antonin Scalia by calling him “one of the greatest justices in history.” But Obama couldn’t even be bothered to spend more than two minutes honoring the man or to go to his funeral. Ted Cruz is more presidential than our current president… by far.