Yep, the DOJ will now be looking even more closely[1] at bloggers and those who post on Facebook and Twitter. Our names will go on yet another list as potential terrorists and threats against the state. Loretta Lynch will pick up where Eric Holder left off and kick it into high gear. All that is needed here is a major terrorist attack and that will get the fascist ball rolling. Either the Internet will be controlled, squashing free speech as we know it, or bloggers, such as myself, will find themselves targeted in one way or another – or probably both. The Left and Barack Obama are determined to put conservatives in their place once and for all regardless of who occupies the White House and the clock is ticking. This is just one more step towards gulag-type behavior. 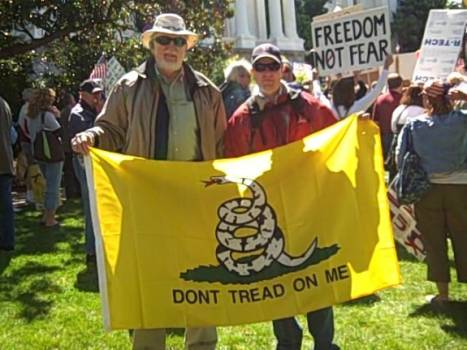 Officers were told that those who displayed the Gadsden Flag were potential terrorists.

In 2009 the Obama administration also warned officials about US veterans.

The DHS/Office of Intelligence and Analysis (I&A) has no specific information that domestic rightwing terrorists are currently planning acts of violence, but rightwing extremists may be gaining new recruits by playing on their fears about several emergent issues. The economic downturn and the election of the first African American president present unique drivers for rightwing radicalization and recruitment.

Now the Department of Justice is studying far-right groups aimed at targeting extremism.

The Department of Justice is concentrating on “far-right” groups in a new study of social media usage aimed at combatting violent extremism.

The Justice Department’s National Institute of Justice (NIJ) awarded Michigan State University $585,719 for the study, which was praised by Eric Holder, the former attorney general, earlier this year.

“There is currently limited knowledge of the role of technology and computer mediated communications (CMCs), such as Facebook and Twitter, in the dissemination of messages that promote extremist agendas and radicalize individuals to violence,” according to the NIJ grant. “The proposed study will address this gap through a series of qualitative and quantitative analyses of posts from various forms of CMC used by members of both the far-right and Islamic extremist movements.”

The study draws more upon right-wing forums than upon the corners of the web inhabited by Islamist extremists.

“The findings will be used to document both the prevalence and variation in the ideological content of posts from members of each movement,” the grant continued. “In addition, we will assess the value of these messages in the social status of the individual posting the message and the function of radical messages in the larger on-line identity of participants in extremist communities generally.” 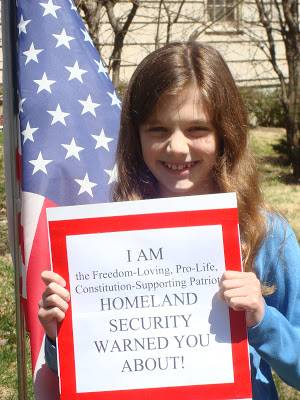 Jane forwarded this photo of one of those dangerous right wing radicals[5] in 2009.

The Obama administration does not believe in Islamic extremism but has identified 72 Types Of Americans[6] who are potential terrorists.

They are just waiting for the right moment aren’t they? The DOJ is not really looking at Islamists. They welcome them. Their primary targets are Tea Party and 9-12 groups. You know, real conservative patriots who still believe in the Constitution. Can’t have that in Progressive America. Big Brother is definitely watching us and most of America is now on one list or another. From having our money in our bank accounts seized, to having our gun rights stripped… from having our water on our lands now claimed by the EPA in the largest land grab in US history, to having our religious and free speech rights abridged… this ain’t our Founding Fathers’ America any more. Unless there is a major change in how the government addresses Americans, a revolution cannot be far off.