Well isn’t that convenient.[1] It turns out an old friend of Syed Farook’s was the one that bought the rifles used in the mass shooting last week in San Bernardino. He bought them in 2011 and 2012. His friend’s name is Enrique Marquez, which I find very, very interesting. What shocked me is where they found this guy when they couldn’t find him at his house. He checked himself into a mental hospital after the attack. That’s like hiding in plain sight and would make you the ultimate victim in the eyes of the left. The FBI says he is not a suspect in the whole thing. Maybe not, but his actions are really off here. The FBI did not say what they were looking for as they raided Enrique’s house yesterday either. If he’s not a suspect, then why the drawn guns, broken windows and the use of a cutting torch to get into the garage? Did I miss something and it is now standard procedure to use an assault team against a non-suspect? 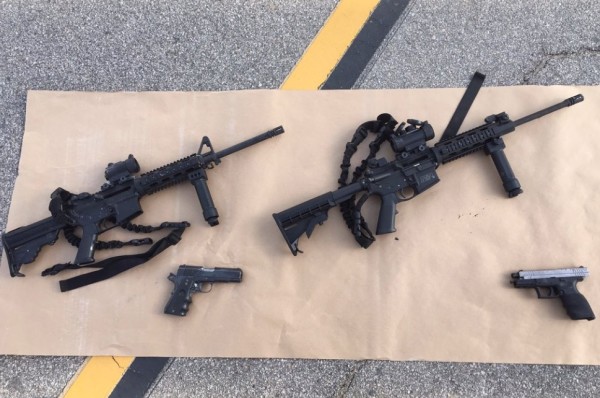 SAN BERNARDINO, Calif. (TheBlaze/AP) — The FBI has not said what it was looking for in a raid early Saturday at the home next door to where San Bernardino shooter Syed Farook’s family used to live in Riverside, California.

Neighbors said authorities with guns drawn broke windows and used a cutting torch to get into the garage. A neighbor said an old friend of Farook’s lives in the house.

But authorities haven’t been able to talk to him because he checked himself into a mental hospital after the attack. The official was not allowed to discuss the investigation publicly and spoke on condition of anonymity.

The FBI has said the man is not a suspect in shootings, though they want to question him.

A law enforcement official said that more than three years ago, that person bought two high-powered rifles[3]later used in the shooting.

The feds would really love to speak with Enrique, but he’s indisposed in the loony bin at the moment. Does anyone see something really wrong with this whole scenario? During the search of Marquez’s home, neighbors say agents cut open the garage door with cutting torches, used bomb-sniffing dogs and temporarily detained his father and younger brother. The man’s father told NBC News Saturday afternoon that he does not know where Marquez is and declined further comment[4]. Investigators don’t yet know whether Farook gave Marquez the money upfront, or obtained the guns from him later. A neighbor who witnessed the search told NBC News that Marquez and Farook had been close friends since childhood, but appeared to have grown more distant in recent months. A spokesperson for the FBI said the warrant was executed overnight following a precautionary tactical entry. Shouldn’t the warrant come first if the guy wasn’t a suspect? What are the odds Enrique converted and his handler told him to check himself into a mental ward? Lots of questions. This just reeks of something really bad.