Outraged shopper who saw a pregnant woman and her son holding a ‘please help’ sign and begging for money on a street corner catches them driving off in their $35,000 MERCEDES [Video]

Man, this brings back memories of Vegas. This was a common scam there. You would see a woman and children begging and then eventually go back to their pricey vehicle and trundle home to their expensive digs. Or the well dressed guy who comes to your car asking for $20 because his car broke down on the freeway and he needs to get gas. Yep… these grifters were making way up in the six figures even back then in the ’90s. Looks like San Diego has been financing the well-heeled face of charity scammers[1]. 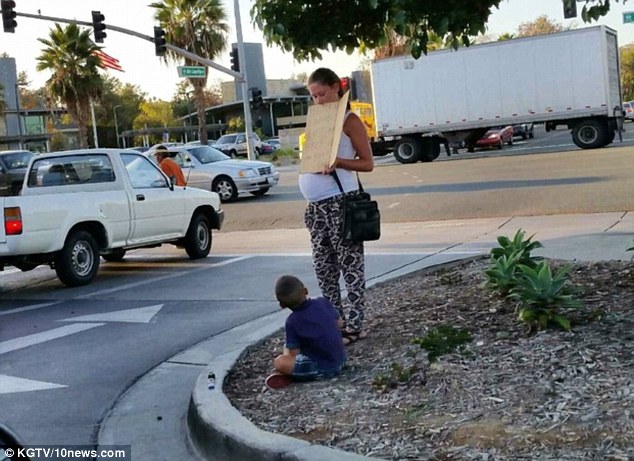 Begging: Shopper Melissa Smith, from San Diego, California, had witnessed this expectant mother and her child begging for money outside the city’s Eastlake Village Center every weekend for the past two weeks.

This is the shocking moment a shopper watched a pregnant woman and her young son beg for money – before getting into a Mercedes Benz and driving away.

Melissa Smith, from San Diego, California, had witnessed the expectant mother and her child panhandling outside Eastlake Village Center every weekend for the past two weeks.

Each time, they would hold a sign reading, ‘Please help’, and would receive money from dozens of shoppers. ‘Lots of people gave them money,’ Ms Smith said. ‘Probably five people in five minutes.’

But this week, Ms Smith was putting gas into her car when she saw the pair leave their panhandling spot and meet up with the woman’s boyfriend – before driving away in a dark-colored Mercedes.

‘I noticed they grabbed their little boy and they got into a Mercedes-Benz,’ she told KGTV[3]. ‘I thought, “Wow, a Mercedes-Benz. It’s not even used – it’s not old. It’s a new Benz.”‘

In outrage, Ms Smith immediately stopped pumping gas, climbed into her own car and followed the Mercedes down the road, while snapping photos of the luxury vehicle and its license plate.

‘Lo and beyond they were in front of us,’ she said. ‘Here they are counting money, laughing and their little boy is not in a car seat or seat belt. He’s all the way in the front seat with them.’

Astonishingly, Ms Smith watched the car turn into a nearby shopping plaza on Bonita Road, before the pregnant woman got out, grabbed the sign and started begging again.

As shoppers reached into their pockets to help her, Ms Smith started taking more photos of the woman, prompting the beggar to start shouting at her. She later sent the photos to KGTV.

According to the news station, the Mercedes’s license plate number is registered to a woman with an Escondidio apartment complex address, where rent costs around $2,500 a month.

Just how depraved do you have to be to steal money this way? Preying on the kindness of strangers who rarely have extra to give, but once you pull at their heart strings, they give what little they have. Notice, these guys were never identified and then conveniently disappeared. They’ve got this down to an art. I don’t mind helping those truly in need, but people like this need to be arrested and prosecuted.