Well, the country boy is Russian[1] and these four guys asked for it. Four black thugs accosted a white Russian couple. Big mistake. The man is a Black Belt and he took out all four of them handily. It was actually very interesting to watch. I really wouldn’t want to tick this guy off the way they did. The men came up and started shoving them and harassing the couple and this guy just let loose. He drop-kicked them and beat the ever-living crap of them as well. No sympathy here for these scum. If the guy had wanted to and this were for real, I’m sure he could have killed them and I’ll bet it crossed him mind. Note to dirt bags, size and race do not always indicate you can have your way with someone. 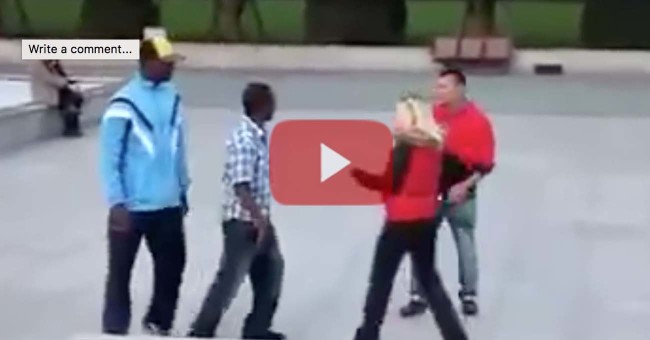 From GOP the Daily Dose:

This couple was taking a picture when 2 black thugs…

It looks to me like they originally accosted the blonde and this guy didn’t have a sense of humor about it. I don’t blame him. But after watching the video a bit more closely, I’d say there’s an even chance it’s not real. The punches and kicks don’t seem to connect just right. It may be some kind of promo video. I’d love it if it were for real though. Another reason I kind of doubt it’s veracity is that they didn’t manhandle the woman much. Just sayin’. Everyone went down way too fast and there was no blood or mess. It looks pretty staged. Nevertheless, there are people out there sufficiently trained to take down attackers. It’s typically much more violent, bloody and drawn out than this and if you solidly hit them, they typically don’t get back up. But the thought is a happy one, so points for that.