This just makes my blood boil.[1] In October of last year, a young military veteran stopped in St. Louis to pump gas. He looks white to me. Three black thugs accosted him. They beat him, yanked his pants down, dragged him and kicked him in the head. Then one of them poured alcohol in his face and they ran over him with a car. Miraculously, the man survived. What bothers me even more is that there were other people there. They just walked on by as if nothing was happening. Two of the thugs were caught almost immediately. One was finally apprehended this week. Throw the book at this scum. 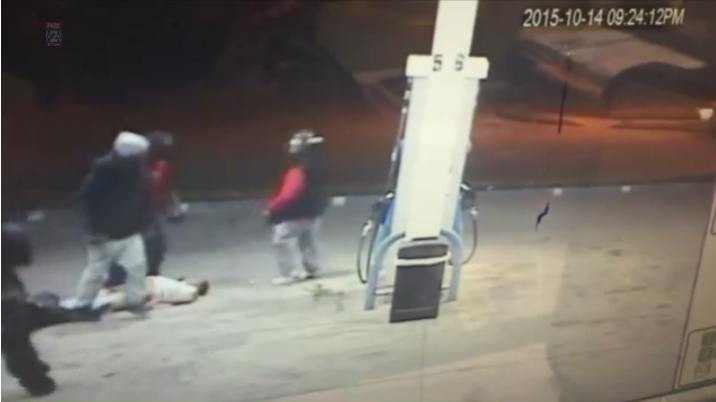 In October 2015, a veteran in an Illinois suburb east of St. Louis was brutally assaulted by a group of three punks while at a gas station[3].

Though three months have passed since the attack, justice is finally being served, as all three thugs are now in police custody, according to KTVI[4].

The Washington Park man was pumping gas at a Mobil station when he was approached and violently attacked by the group of thugs[5], who beat and kicked the veteran into submission, poured alcohol on him and ran over him with a car before leaving him to die.

This veteran served his country in some foreign hellhole just to come home to this crap. They left him there to die… I’m sure they thought he was already dead. And for what? Because he was white? Because they wanted to rob him? Animals. I hope all three go away forever over this. The three men arrested for the assault have been charged with aggravated battery and mob action. That’s no where near harsh enough. It was attempted murder, pure and simple. The vet is now at home recovering. Perhaps justice would be doing the same to these beasts that they did to him. I’m up for that one, trust me. It’s a pity this guy wasn’t armed and didn’t dispatch all of them to hell where they belong.