Victoria’s Secret’s brand PINK has a new Spring Break ad campaign aimed at girls as young as 15 years old. Understandably, parents haven’t been too excited about their 15 year old daughters wearing panties emblazoned with slogans like “Wild”, “Feeling Lucky” and “Call Me”. 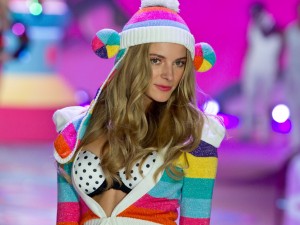 [1] After an eruption of protests, Victoria’s Secret has begun backpeddling hard. They released this statement yesterday.

“In response to questions we recently received, Victoria’s Secret Pink is a brand for college-aged women. Despite recent rumours, we have no plans to introduce a collection for younger women. Bright Young Things was a slogan used in conjunction with the college spring break tradition.”

Are the people who are upset about Victoria’s Secret Pink line introducing sexually charged slogans to their young daughters overreacting? Not based on this statement from Victoria Secret’s Chief Financial Officer Stuart Burgdoerfer.

Targeting teen-age girls like this? Then lying about it? Victoria’s Secret should be ashamed and parents should be outraged.