There are monsters and then there are pedophiles[1]. Ian Watkins is a demon walking around in a human suit. 35 years hardly seems a strong enough punishment for such a deviant. He tried to rape an 11 month-old baby. Ponder that for a moment. He got off online with his beastie girlfriend talking about her getting pregnant so they could have a child to molest. What kind of twisted sociopath is allowed to walk around like this? The kind that is a celebrity rocker and thinks it is ‘megalolz.’ 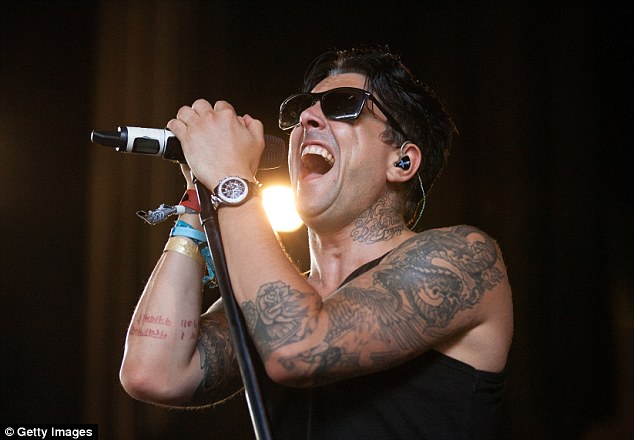 Mjadzelics is said to have discussed Watkins’ crimes with the singer (pictured) years before he was arrested.

Paedophile singer Ian Watkins made a sex tape with a girlfriend where they spoke of his sickening fantasies of child abuse, a court heard today.

Mother-of-one Joanne Mjadzelics, 39, allegedly discussed child abuse with Lostprophets singer Watkins before he was jailed for 35 years for a series of sex offences.

A court heard police seized the rock star’s computers and video tapes when he was arrested and discovered one titled ‘Jo Paedo Talk Cardiff’.

When they played the video they saw Watkins and Mjadzelics having sex and talking about having a baby together so they could abuse it, the court heard.

Prosecutor Jim Davies read an extract of the 2008 video to a jury trying Mjadzelics for allegations of possessing indecent images and sharing them with Watkins.

Mr Davies said: ‘While they were having sex they were talking about him getting her pregnant so they could have a child to abuse.’

Cardiff Crown Court heard the sickening tape was made nearly four years before Watkins was arrested for a string of child sex abuse offences.

The jury was told police also discovered ‘disgusting and abhorrent’ online sex chats between Mjadzelics and Watkins, which had taken place three years after the video was made in May 2011.

During the chats, indecent images of children were sent by Watkins to Mjadzelics – and she sent replies saying she wanted to ‘play for real’.

In the late-night messages, they also described the abuse they wanted to inflict on infants and animals.

In one exchange, Mjadzelics told Watkins: ‘Part of me feels you get off on showing me stuff you can get away with, knowing that is what I have wanted since forever.’

Mjadzelics, of Doncaster, South Yorkshire, told Watkins she thought they had a ‘deep connection that couldn’t be matched’.

She signed off one message with the phrase: ‘Child molesters till we die.’

Watkins replied to her saying: ‘I am really happy you now know it is not just talk. The sooner we can be together the better.’