Wonder if she had a gun permit? Regardless, I don’t blame this woman one tiny bit for carrying a gun[1] while delivering pizza. It’s dangerous for anyone, but especially for a woman. I can only imagine what went through her mind when he told her to get out of the car and get on the ground. At least she had the presence of mind to reach for her gun and shoot the thug in the face. It’s a wonder he’s still alive. Unfortunately, he had an accomplice who stole her car and all that was in it. But she will live to see another day and I would hope Papa John’s supports this woman for simply defending her own life here. 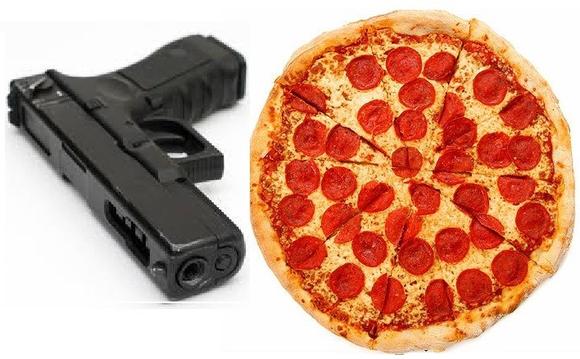 According to recent reports[2], a man is recovering in jail after being shot during a botched robbery Sunday in Georgia. The Atlanta Journal-Constitution indicates a delivery driver working for a local Papa John’s was making a delivery when 24-year-old Decatur resident Donquaz Devon Stevenson ordered her to get on the ground at gunpoint.

“She arrived at the location and a male began approaching the vehicle she thought was there to pick up the pizza,” said DeKalb County Police Capt. Steve Fore. “When he got to her, he produced a handgun and forced her out of the vehicle and onto the ground.”

Instead of giving in to his demands, however, she was able to retrieve her own handgun and shoot Stevenson in the face.

“She had her own firearm in her pocket,” Fore explained, “and while down on the ground she was able to retrieve that firearm and then shoot the suspect.”

The would-be robber was apprehended a short time later and was jailed on an armed robbery charge. An accomplice was able to get into the employee’s vehicle and drive away, however, and police are still searching for the suspect as of the latest reports available.

Fore explained that the victim felt she “had no other choice” in responding to the threat, adding she “must have been in fear for her life and she reacted.”

At this point, however, she and her family are hoping Papa John’s will be as understanding. Her mother spoke to a WSB-TV[3] reporter and explained her daughter is not only in shock after the harrowing experience, she is afraid she might be fired for carrying a gun at work.

The police seem to think this whole thing was a set up for a robbery and it sure looks that way. All the employees are abuzz about this. Papa John’s should step very carefully on this one and make sure they come down on the right side of the Constitution. Their customers are watching them closely. If I were this young lady, I would just be glad to be alive and unhurt over this. You can always get another job… death is pretty final and hers could have been drawn out and horrific.

UPDATE: The pizza franchise told FoxNews.com [4]that the employee, who hasn’t been named, will not be fired from the company.