A group of eight pro-life demonstrators were arrested outside Speaker of the House John Boehner’s (R, OH) office today. The pro-lifers were trying to encourage Boehner to restart the debate on a stalled bill that would ban abortion after 20 weeks. 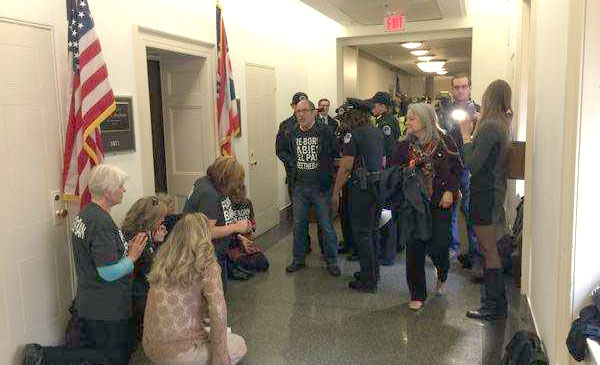 What the heck? Now Republicans are having pro-lifers arrested[1]?

Eight pro-life activists were arrested this morning in an effort to put political pressure on House Speaker John Boehner, R-OH, to pass a 20-week ban that has stalled in the House.

Operation Rescue’s Troy Newman, Rev. Patrick Mahoney of the Christian Defense Coalition, and blogger Jill Stanek, along with five other activists, were arrested by the U.S. Capitol Police (USCP) at approximately 11:45 a.m. EST in a combination press conference and prayer vigil.

Spokespeople for the police told LifeSiteNews that they arrested eight protesters, who “were charged with violating D.C. Code 22-1307.”

Punishment for this violation can lead to a fine of as much as $500, up to 90 days in prison, or both. The spokesperson was not able to tell LifeSiteNews what would happen to Stanek, Newman, Mahoney, and the others, noting that they were still being processed at approximately 1:00 p.m. EST today