Yesterday, a gunman in Colorado Springs walked calmly[1] down a quiet street there. He had just left a house where there was a basement fire. That’s where the first victim was found some say. The man then came upon a woman who had just come out of her house and would have surely killed her if a cyclist had not came out of nowhere and put himself between her and the shooter. He shot the cyclist killing him. He saved that woman’s life. The shooter shot one other person while on his spree, killing them as well. When the police got there, he opened up on them and the police took him out. No great loss, I just wish it had been before more died at the hands of this psychopath. 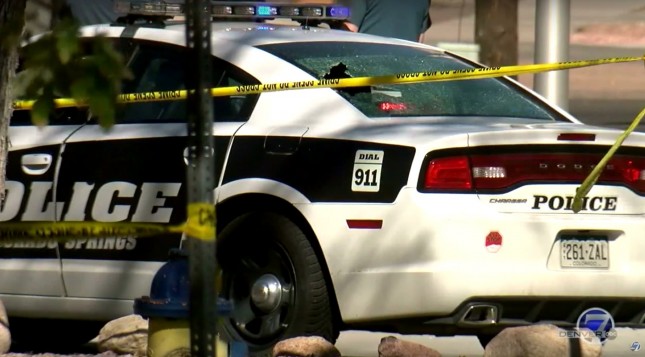 COLORADO SPRINGS, Colo. (TheBlaze/AP) — Four people are dead, including a suspected gunman, following a shooting spree in Colorado Springs on Saturday that ended in a gun battle between police and the suspect.

Lt. Catherine Buckley said officers were responding to a report of shots being fired when they spotted a suspect matching the description of the person they were trying to find. Buckley said the suspect opened fire, and police fired back.

Witnesses described a chaotic scene as the suspect went down the street with a rifle.

Matt Abshire, 21, told the Colorado Springs Gazette[3] he looked outside his apartment window and saw a man shoot someone with a rifle. Abshire said he ran to the street and followed the man and called police.

The man suddenly turned and fired more shots, hitting two women, Abshire said. Their names and conditions were not available.

Alisha Jaynes told KKTV-TV[4] she was at an ATM when she saw a man with a gun walking calmly down the street.

“Me and my son were at the 7-Eleven using the ATM…as soon as I walked outside I heard six gunshots up the street. … We see the cop cars swarm in,” Jaynes told the station. “I saw the guy with the gun just walking with the gun in his hand. … Just calm, standing there with a gun in his hand.”

“They yelled, ‘Put the gun down,’ and he turned around, and that’s when they shot at him a good 20 times,” witness Aaron Nicks said. “There was a lot of gunfire.”

Buckley said the crime scene covered several major downtown streets. Those streets were shut down most of the day while investigators tried to figure out what happened.

Buckley said the investigation of the police shooting has been turned over to the El Paso County Sheriff’s Office.

There were three crime scenes over several city blocks. Concerning the cyclist, “He turned around and shot the boy, and the boy screamed, ‘Why did you shoot me?’ Then he shot him three more times and as he hit the ground he screamed ‘Oh god, no,'” shooting witness Betty Barker told a reporter. She said the victim then died. The police are not releasing the names of the victims or the suspect at this time. The final shootout occurred in front of a Wendy’s restaurant evidently. The story is not solid on facts as I also hear that he shot two ladies, one in the jaw, one in the chest and both died. All the versions say four are dead though and that one was the shooter and one was the cyclist. No motive has been found yet either. It sounds like the guy snapped and was just going to calmly kill people until he was killed as well. Wish granted.[5]