She Purchased This Foreclosed Cabin. What She Did With It? OMG

Tina Spangler bought a foreclosed 1950’s cabin in upstate New York[1] that was in dire need of salvaging. She has brought it back to life with a very kitschy feel to it. She totally remade the small cabin and it is very interesting. It’s full of history and she has lovingly put the home together. It means a great deal to her. I’m not fond of it myself. To me, it looks too haphazard… too eclectic for my tastes. But it certainly has that by-gone vibe to it. I do like the pictures of women she chose for the walls. The woman is an artist and she definitely has her own style. My tastes run in another direction, but to each their own. I can see why this went viral. 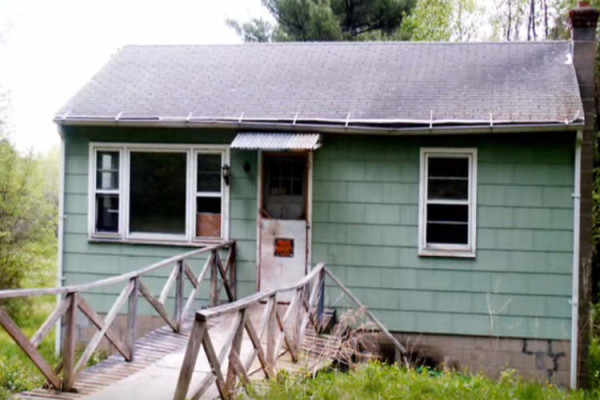 When Tina Spangler began her simple cabin renovation, she should have known it would turn out to be anything but. Two hours away from Manhattan lies Narrowsburg, New York and Luxton Lake, a pictuersque location that would prove to be a worthy canvas for Spangler’s creative inspiration.

She first laid eyes on this 1950’s cabin back in 2004, after a bank forclosure forced the current owner to move out. Spangler decided to ditch the city life and head off to the mountains, seeking a simpler life among a far more relaxed population. But what she ended up building is cooler than anything even the most adventurous designer could dream up.

Spangler filled the home with various items that she had collected throughout her life, creating almost a museum to her travels and adventures. On one floor lies a 1920’s linoleum rug, in the kitchen a 1930’s monitor-top refrigerator.

Spangler is not alone in her love of items from the 20’s, 30’s and 40’s. I love them too, just in a different way I guess. The house is full of nostalgia and I love that nothing is perfect in it. It feels long lived in. “When people decorate, it’s not from one particular year,” Spangler writes in a featured Etsy blog. “People hold onto things for decades, so I think that there’s no rules that it has to be from a certain decade or from a certain year.” The surrounding area is lovely as well. It looks like the perfect retreat for contemplation and artistry.