Last week, a vet in New York found a note[1] on his car that read: “I see you have a Purple Heart sticker and an Iraq War veteran sticker. It’s too bad that you were only wounded, the world would be better if you were killed. All of you Islamophobes vets deserve to die!! F*ck you and your “service.”” The vet in receipt of this slander, laughed it off and is obviously unafraid. Good for him. I take this threatening note very, very seriously. It is an act of terrorism and it’s not the only one being left out of the news. In May of 2015, the wife of a US military member was approached in front of her home by two Middle-Eastern males. The men stated that she was the wife of a US interrogator. When she denied their claims, the men laughed. The two men left the area in a dark-colored, four-door sedan with two other Middle-Eastern males in the vehicle. The woman had observed the vehicle in the neighborhood on previous occasions. Incidents like this one[2] have been reported through June of 2015 in Wyoming. I have also heard of other notes being left on veterans’ cars in other states. That’s very, very serious business. 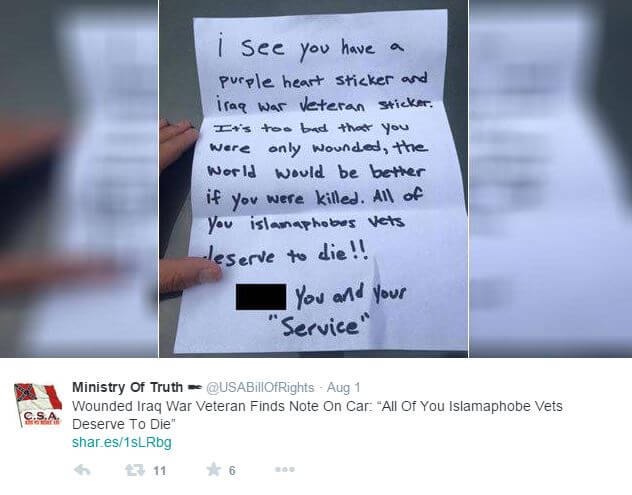 ON Thursday, when an unidentified Iraq War veteran[4] returned to his car after a shopping trip, he discovered a note that read, “All of you Islamaphobe vets deserve to die.”

According to reports, however, the New York resident and Purple Heart recipient was anything but fazed, in that he laughed it off as nothing to worry about[5].

But not everybody reacted in the same nonchalant way.

Take for instance local Navy veteran[6] Robert LaPrairie, who told reporters that the note made him sick to his stomach.

“To me, it’s an act of terrorism really,” he said.

Lt. Steven Stockdale of the Warren County Sheriff’s Office concurred and assured reporters that his office planned to inspect the note for any “potential criminality.”

“Communication these days has gotten very easy for people who want to stay anonymous,” he told reporters. “And it takes a lot more courage to strap on an 80-pound pack and go to the Middle East[7] and fight for your country than it does to scribble on a note and leave it cowardly behind on somebody’s windshield.” (H/T Washington Free Beacon[8])

Truth be told, it takes zero courage but a whole lot of arrogance to do something as cowardly as leave a threatening note on a veteran’s car.

Every American, including the idiotic liberal ones, ought to be appreciative of our veterans and the efforts they make to keep us safe.

This was a cowardly act. But cowards can also attack from the shadows and come at you from behind. I am glad the police are looking into this, but I am very uneasy that this is an indicator of something very bad to come. This shows a brazen disregard for the law and absolutely no fear of any sort of repercussions. Sooner or later, there will be a large scale attack from radical Islamists on American soil again. They are telling us they are coming. We should believe them and take threats like this one to heart. It does make you sick to your stomach and I know how tempting it is to laugh it off, but don’t. Now is the time for vigilance and action. Keep your powder dry and your family close and get ready.