Just to be clear[1], this was a black communist from New York that hit this preacher in the mouth for preaching the gospel in a “free speech zone” at the University of Missouri. Then he had the nerve to grab the preacher’s microphone and rant about oppression, free speech and Martin Luther King Jr. The guy hasn’t been charged because they can’t find him yet. The actual event wasn’t recorded, but there is video on Periscope that backs up the alleged attack. Then there is the bloody photo of the preacher. The communists are running the show at Mizzou, stirring up racial animosity and hate. It’s a ticking time bomb and it’s spreading to other campuses. 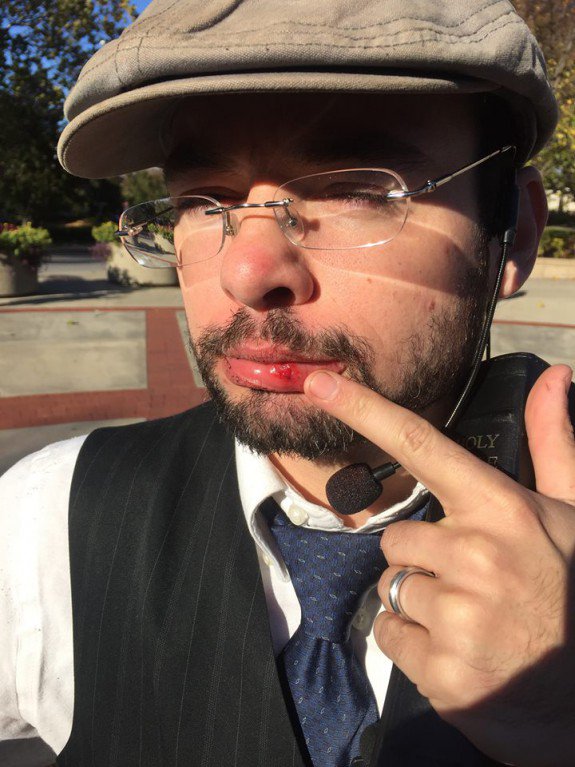 A black activist allegedly assaulted a Christian preacher in a “free speech zone” at the University of Missouri on Thursday.

Jake Loft, who identifies himself as a campus associate for Fox News, posted a photo on Facebook showing preacher’s bloody and swollen lip following the alleged attack at the college’s so-called “speaker circle.”

“I can no longer stand on the outside of this,” Loft wrote. “A man of God was assaulted in our “free speech zone” on campus by someone associated with a group of African American Communists from New York for simply using his first amendment rights to spread the word of God. This protest has become an attack on free speech and it is wrong.”

The preacher was holding a Bible and a sign that included a reference to Hebrews 5:9 while he used his free speech to talk about the gospel. Though no video footage showing the exact moment of incident was immediately available, a Periscope video[3] appears to provide some witness corroboration to the assault.

“So what happened was, the guy who is talking now punched the guy that’s holding the sign and talking about Jesus in the mouth, which is really horrible,” the man recording the video says.

After allegedly punching the preacher, the black activist went on to talk about oppression and free speech. He also cited Martin Luther King Jr., who enacted lasting social change through non-violence.

Major Brian Weimer of the University of Missouri Police Department confirmed to TheBlaze that an incident report was filed, but police have yet to make an arrest because they haven’t been able to identify the suspect. The investigation into the alleged assault is ongoing.

So much for their “free speech zone.” One student there said they were sick and tired of the First Amendment. These fascists would love to do away with the Constitution altogether. This preacher was attacked for preaching Christianity. The communist didn’t like that and took it upon himself to shut him up. I guess some speech is freer than others at Mizzou. The man that assaulted the preacher was part of the same New York Communist group that went to Ferguson last year. All of these professional protesters should be rounded up and arrested for assault. Once again, behind all of this, you will find henchmen for Barack Obama and Valerie Jarrett. Hitting a man of God is just atrocious and letting communists be in control is insane. 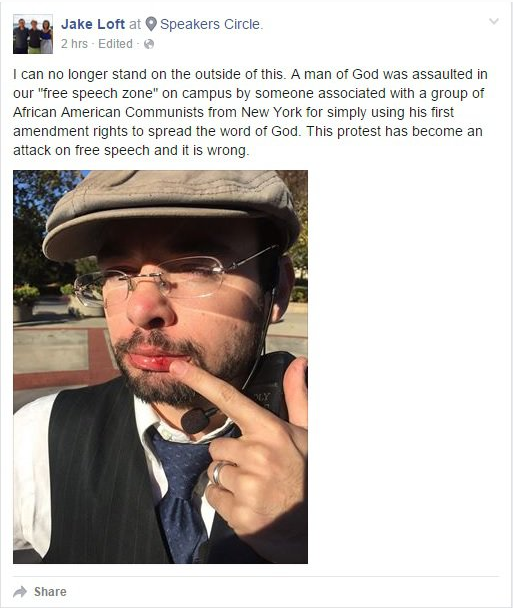