Rutgers Professor Proclaims: All White People Are “The Face Of The Oppressor”

So, let me get this straight…[1] this Rutger’s professor is basically telling whites, ‘y’all look alike to me.’ What racist blather. And she hates men – it’s a twofer. Make that a threefer – she’s hates police too. Brittney Cooper is just chock full of hate – facts be damned. It doesn’t matter to her that Sandra Bland would not get out of her car when instructed by the officer to do so. He went a bit over the top when he said he’d light her up with a taser, but she was being uncooperative and belligerent. When she did get out, she argued with him, called him a bunch of vulgar names and kicked him in the shin. He told her that originally she was going to get a warning; now she was going to be arrested for assaulting a public servant. She richly earned her arrest. But it didn’t end there unfortunately[2] and now you have racists screaming for this officer’s head because Sandra Bland decided to off herself in her cell. She hung herself using a trash can liner. This is a woman who had previously tried to commit suicide. But according to Cooper, it’s so obviously the white, male cop’s fault. How did this woman ever become a professor at a major university? 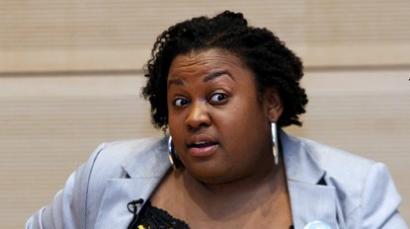 In a piece for Salon this morning[4], Rutgers University professor Brittney Cooper proclaimed that all black people are “one police encounter from the grave,” and that white people must start lumping themselves together as “ the face of the oppressor.”

This piece comes after Sandra Bland, an African-American women, was found dead in her cell following a dramatic arrest in Texas earlier this week. Police have labeled the death a suicide, and are pointing to new evidence that would support this claim. Bland’s family is disputing this claim, and have ordered their own autopsy to follow up the one performed by the state.

Cooper was very clear in her condemnation of the arresting officer despite the fact that investigations have hardly even begun. In her mind, he is guilty of a much worse crime than abuse of power during a traffic stop. He is guilty of the standard crime committed by all white males– supremacy:

Nothing about this officer’s actions were legal. It is the evidence of Sandra Bland’s irritation that caused this officer to escalate. He firmly expected to be able to harass a citizen going about her business and have her be okay with it. He expected that she wouldn’t question him. He wanted her submission. Her deference. Her fear.

White power. Black submission. It’s the oldest trick in the white supremacist handbook. The officer might think he wanted Sandra Bland’s respect. But what he really wanted was her fear. And the fact is: He is entitled to neither.

She did not owe him either her respect or her fear. When his white maleness and his badge didn’t elicit the first, he used the power of that badge to compel the second.

She goes on to let us know that no matter what comes to light during the investigation into Bland’s death, her mind is made up:

Now Sandra Bland is dead. She isn’t dead because of suicide. No matter what they say, justice, reason, fairness and good damn sense compel us to believe differently.

Not only is her mind made up on the Bland case, her mind is made up on police and white people in general– That they’re narcissistic, dangerous bullies:

Black people, of every station, live everyday just one police encounter from the grave. Looking back over my encounters with police, it’s truly a wonder that I’m still in the land of the living.

There is a way that white people in particular treat Black people, as though we should be grateful to them.

She ends her racist tirade with a suggestion on how white people should feel about their alleged evil — An evil that cannot be overcome because it is inherited by birth — The transgression of their race.

White people resist seeing themselves in the face of the oppressor. That mirror reflection is almost too much to bear. I get it. So then they resent the person that holds up the mirror. But let me just say as directly as I can: White people must begin to see themselves in the faces of the mostly white police officers who keep committing these atrocities against Black and Brown people. This will not stop until you recognize that you are them. These officers are your brothers and sisters and aunts and cousins, and sons and daughters and nieces and nephews, and friends, and church members. You are them. And they are you.

Throughout this anti-white tirade from a Big Ten professor, Cooper never once suggests that other races or creeds should look in mirror for comparable actions. That would go against the creed of liberalism. The Muslim community need not answer for the killings of 5 service members in Chattanooga, or the Tsarnaev’s Boston bombing[5]. But the white community must answer for crimes committed by terrorists like Dylan Roof, or the alleged misconduct of a white police officer. This type of one-sided logic is simply standard procedure for liberals like Cooper, and liberal organizations like Salon.

According to this professor, all whites, just for the simple fact of being white, are guilty and ipso facto – oppressors. Only whites, mind you… If you are Hispanic or a Muslim, you get a pass. But white people? Well, they are devils I hear. Never mind that crimes are committed every day by all races and all ideologies. Cooper holds a special place in her black heart for white male cops. Occasionally you see a cop go rogue or make a mistake. That’s rare. And police are pretty good about justice within their own ranks. Contrary to what Cooper is insinuating, you do not have roving, racist white cops across the nation brutalizing black individuals and killing them without cause. Most crimes that are handled by police are crimes that are without a doubt perpetrated by those in custody. According to the likes of Cooper, if you are black and step out of line, white cops should give you special treatment – a unique deference. That is social justice thinking – Liberal logic. It’s pervasive in the Marxist media and in Liberal academia. I sure wouldn’t want Cooper teaching my children in college – no matter what race they were.