Sadie Robertson Shocks Fans With THIS…

I’m a Christian and I don’t see anything wrong with this.[1] It’s not something I would personally do, but it works for Sadie. Sadie Robertson just got a new tattoo… she had the word “fearless” inked on her left arm. She did it to declare her devotion and faith in God and that she need not fear things because of it. Her dad, Willie Robertson, approved of the tattoo. Sadie has overcome a great deal of fear in her life and she has done so through her Christian faith. She’s not ashamed or bashful about saying so either. The tattoo was not done out of vanity, but out of faith. I’m a bit shocked she did it, but the sentiment and intent behind it is one to be admired. 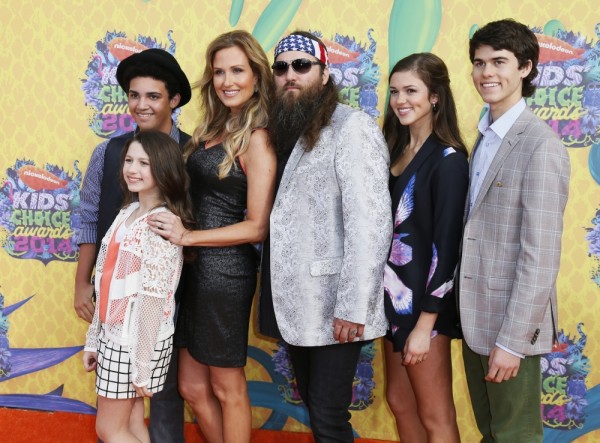 It wasn’t enough for Sadie Robertson to get her father’s approval for a new faith inspired tattoo, the 18-year-old “Duck Dynasty” star also had to explain her decision to the world.

“I fully understand tattoos are not for everyone,” Robertson wrote in an Instagram[3] post debuting the word “fearless” tattooed on her arm. “Allow me to explain … for every summer camp I went to throughout my life I wrote down the word anxiety for my biggest struggle. Fear began to consume me.”

Sadie, the granddaughter of Duck Commander founder Phil Robertson and daughter of the company’s CEO Willie Robertson, who heads the family business of duck hunting merchandise, revealed that she conquered many fears this year which inspired her permanent body inking. 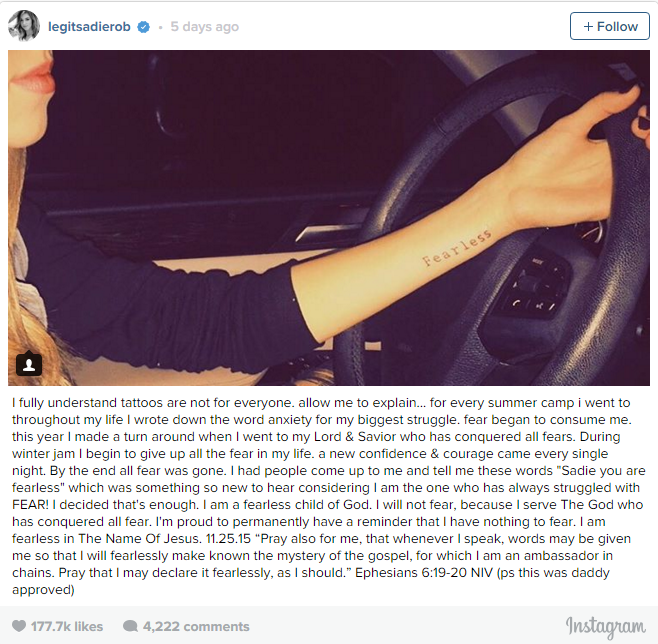 “This year I made a turn around when I went to my Lord and Savior who has conquered all fears. During Winter Jam I began to give up all the fear in my life,” she wrote[5]. “A new confidence and courage came every single night. By the end all fear was gone. I had people come up to me and tell me these words: ‘Sadie, you are fearless,’ which was something so new to hear considering I am the one who has always struggled with FEAR!”

For Sadie, the permanent ink on her body reminds her of God conquering all fear.

“I decided that’s enough. I am a fearless child of God. I will not fear, because I serve the God who has conquered all fear,” she wrote last week. “I’m proud to permanently have a reminder that I have nothing to fear. I am fearless in the Name of Jesus.”

Sadie went on to include Ephesians 6:19-20 (NIV) in her post which reads: “Pray also for me, that whenever I speak, words may be given me so that I will fearlessly make known the mystery of the Gospel, for which I am an ambassador in chains. Pray that I may declare it fearlessly, as I should.” ‭‭

Earlier this year, Sadie spoke to The Christian Post about the importance of staying true to herself.

“In reality, (people are) not staying true to who they are. Whenever you try to be someone that you’re not, that’s really hard,” she told CP[6]. “You can get really confused and honestly, it’s so crazy. So I’m thankful that I had a family that showed me that before I had to deal with (fame).”

Sadie is staying true to who she really is. As a role model, she is one of the best out there. I love her entire family and always have. They are true Christians who walk the walk. As long as we have God, we truly have nothing to fear. This life is just a lesson… a part of our path to a better existence with God. Sadie is wise and brave beyond her years and she was taught that by a well-grounded and devout family. God does conquer all fear and if a tattoo signifies that for her, I think that is a good thing.