Sarah Palin Tells SNL Hecklers and Trolls to Go and “Get a Job!” [Video]

Get ’em, Sarah![1] Sarah Palin looked stunning as always on her way to the Saturday Night Live after-party. But she took time to let admirers take photos with her. She didn’t even seem phased when hecklers started yelling that her dress was too small and she should wear a scarf. They lamely shouted that she wouldn’t get any votes either. I wouldn’t count on that, you trolls. There are millions of us who would just love, love, love to vote for Sarah Palin. I’m a Ted Cruz fan, but I’m right there for her too. 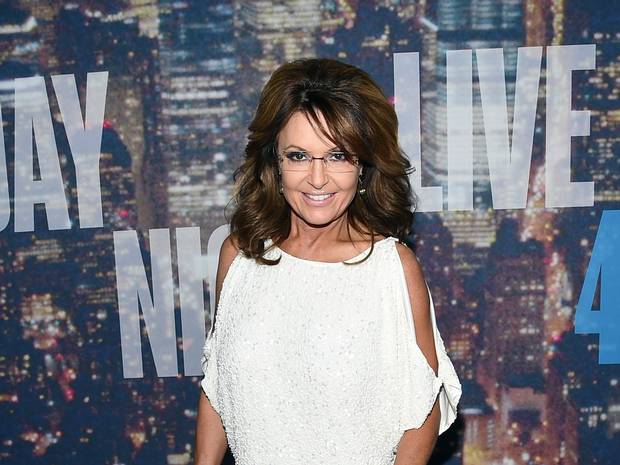 Daft attracts daft. A small, but vocal group of hecklers attempted to lay-into Sarah Palin as she arrived at the Saturday Night Live after-party. The heckles weren’t very good: “That’s a small dress! Get a scarf!” “No one will vote for you!” And Palin’s responses were pretty weak, too: “Get a job!” (But Ms. Palin, today’s a holiday, surely that’s why you were out late last night celebrating a show that reveled in heckling you.)

The heckler might prove to be right that Palin will not get many points in Iowa in the initial bid for the 2016 Republican presidential nomination. But Palin did get points for one of her comebacks: “I’m on this side of the velvet rope!” Still, her quick shifts from selfie-smile-pose into verbal combat didn’t exactly seem presidential.

Also, she said she was in show business. Good luck convincing the GOP that’s a good thing.

As far as being in show biz, she is, you morons. She’s on Fox News all the time and she’s had her own TV shows. She’s also a writer. Anyone, by the way, remotely involved in politics, is to an extent, in show biz. That’s part of the gig. Palin is right telling the hecklers to get a job. I’m so sick and tired of the rampant fear the Left shows when a real conservative steps into the room. What a bunch of cowards. Jealous, hateful, wannabes who just can’t stand that a smart, beautiful woman could wipe the floor politically with anyone they could dream of serving up. My money’s always on Palin – you boys better be wearing your big boy pants if you go after her. That’s one mamma grizzly who will just tear you apart and smile while she’s doing it.