This is absurd and grossly unfair[1]. This server listed a table as ‘5 black guys’ on the receipt to describe who he was serving. These said customers then decided to be offended and complained. The server didn’t use a racial slur… he simply described who was at the table. This is ridiculous. If it had been 5 white guys, no one would have blinked. The server did nothing wrong, but because he used a non-politically correct word – black – he was fired. Insensitive, my arse. That is one restaurant I will never go to in Dallas and neither should you. 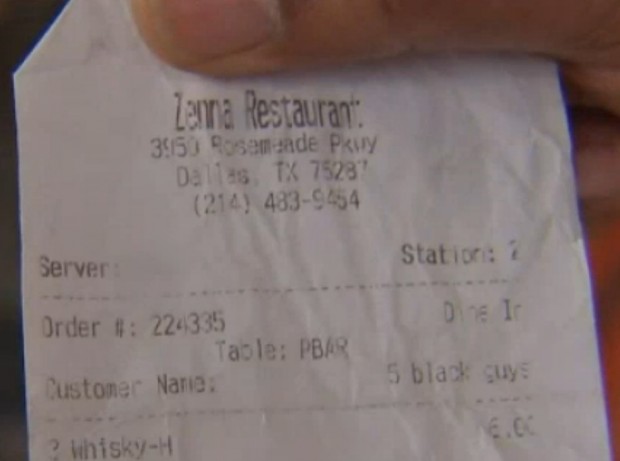 He was fired because of what he wrote on a receipt.

But plenty of people are arguing that what he wrote wasn’t actually that bad.

A server at Zenna Thai and Japanese in Dallas was canned after writing “5 black guys” to identify a group of customers on a receipt Friday evening, KXAS-TV reported[2].

“I looked at it and seen where it said customer name, and it said ’5 black guys,’” said Jarian Walker, who received the receipt. “I was like, ‘OK, wow.’”

Walker and the rest of his party complained, and the restaurant promptly fired the server.

The restaurant also stated that its policy is to identify customers by clothing if need be — sometimes multiple servers share tables and need to know who gets what — but never by race.

In the comment section of KXAS’ article, most people expressed surprise that the server was fired for the receipt.

“A man lost his job because he said ’5 black guys,’” wrote commenter Clive Jackson. “How is that in any way derogatory? I agree from a customer point of view; they shouldn’t be showing their customers that & it was very unprofessional, but this is blown far too out of proportion.”

“Wow, so now using non-racial slurs to describe people is wrong,” added commenter Barry Setzer. “Pretty soon, you won’t describe people by color, race, gender, what they are wearing or anything. Then they will all complain that they are always getting the wrong order. Well tough to keep track at a place like that when all you can write down is 5 people over there.”

As commenter Stanley Fox put it:

It was a description not a racial slur. He was trying to give good service and avoid confusion of the wait staff. If the group had been white and he described them as 5 white guys nothing would have been said. He didn’t use the “N” word. People of all races, religions, gender, life style, etc. need to quit looking for reasons to be angry over such trivial things. We all should not have to walk on egg shells to try to please everyone because at one time or another we have all done similar innocent things.

Some people make a career out of being offended like these people do. They must be pleased as punch they got that server fired over this. Disgraceful. And the media hyping it are just moronic. Now, someone who was a hard worker and good at what they did is looking for a new job because they used a normal everyday word. One which was accurate by the way. It’s not safe to just talk normally any more. The Zenna Thai and Japanese Restaurant in Dallas should be deeply ashamed of themselves. They can stuff their political correctness. I predict that server will find employment fast because of this stupid occurrence. I guess even Dallas has gone Progressive. How very sad.