A two and a five year-old were brutally gang-raped[1] in separate incidents in New Delhi, India. Here’s the kicker… you have to read the whole Yahoo! article before you find a single mention of the word ‘migrant’ right at the end of the piece. Islamic refugees are raping these children. In fact, the abuse of women and the rape of children has reached epidemic proportions in the country. Angry crowds are blaming the police. You know why? Because many of the police are Muslim and are turning a blind eye to the rape and abuse. It’s not their problem and the acts are basically sanctioned by the Ummah. It’s part of Shariah Law. Another four year-old was raped, slashed with a knife and left for dead a week ago. The two toddlers who were just gang-raped will survive and recover, at least physically. Not everyone makes it… a young student was gang raped to death on a bus in 2012. In India, there were 36,735 rape cases in 2014 and it is said that was severely understated. 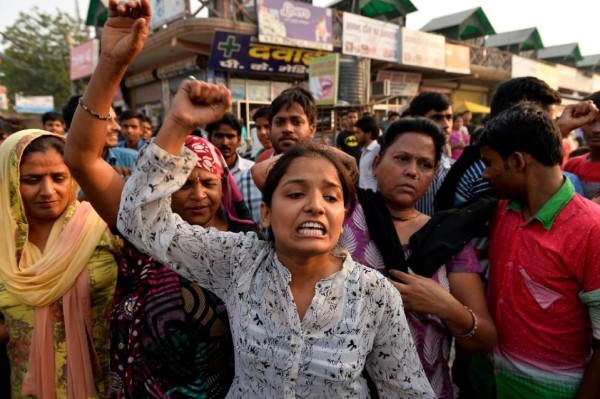 Indian protesters shout slogans during a demonstration near the home of a minor girl who was raped in New Delhi, on October 17, 2015 (AFP Photo/Chandan Khanna)

New Delhi (AFP) – Angry crowds gathered Saturday in New Delhi to accuse police of failing to act over the rape of a toddler, with outrage mounting after the gang-rape of a five-year-old girl in a separate attack.

The two-and-a-half-year-old girl was abducted from a religious event in west Delhi by two men on Friday night and raped before being dumped in a park near her home, relatives and police said.

In a separate incident on the other side of the city, the five-year-old was lured to a neighbour’s house and raped by three men, a police officer told AFP.

An agitated crowd of more than 100 people gathered near the toddler’s home late Saturday afternoon attempting to block traffic and lambasting the police’s failure to make arrests in the case, according to an AFP reporter at the scene.

“They (police) are not doing anything to arrest the rapists. We don’t feel safe in this city and there will be a day when parents will stop giving birth to girls fearing they will be raped,” a female relative of the girl told reporters without giving her name.

The two attacks come as New Delhi grapples with a grim litany of sexual assaults against women — and in several recent cases, children — that have sparked outrage in India and abroad.

“We have launched a manhunt for the suspects. So far no one has been arrested,” Pushpendra Kumar, West Delhi police chief, told AFP of the younger girl’s case.

“Two men were involved in the abduction of the girl and the tests have confirmed rape,” Kumar said, adding that further examinations would show whether both men raped the toddler.

He said they found the younger child bleeding profusely several hours after she went missing. Authorities have released CCTV footage of two men riding away on a motorbike with the victim in an attempt to catch the alleged perpetrators.

Separately, police in eastern Delhi arrested three men overnight in the case of the five-year-old victim, whom tests showed was raped multiple times, after locals managed to catch her alleged assailants.

“Her clothes were partially torn with blood spots all over them. Some locals saw her and she told them she was sexually assaulted,” an officer from Anand Vihar police station in eastern Delhi told AFP on condition of anonymity.

“Some of the locals then barged into the house and caught them (the alleged perpetrators) before handing them over to us,” the officer said.

Both girls are undergoing medical treatment but are believed to be out of danger.

The latest attacks come eight days after a four-year-old girl was allegedly raped and slashed with a blade before being abandoned by a railway track in the capital.

Police arrested a 25-year-old man in that attack, in which the young girl suffered severe internal injuries.

“When will Delhi wake up? Till when will girls continue to be brutalized in Indian capital. Gangrape of 2.5 year n 5 year old. Shameful,” Delhi Commission for Women chairwoman Swati Maliwal tweeted.

Delhi Chief Minister Arvind Kejriwal expressed anguish over the rapes, terming them “shameful and worrying” on Twitter, but blamed Prime Minister Narendra Modi’s government for the security situation in Delhi.

“Repeated rape of minors is shameful and worrying. Delhi police has completely failed to provide safety. What are PM n his LG (lieutenant governor) doing?,” Kejriwal tweeted before heading to meet the victims in hospital.

Kejriwal and Modi’s administration are jostling for control of the capital’s police department, with Delhi city authorities saying they are unable to improve security for women.

They deflect the blame on to Modi’s central government which controls Delhi’s 84,000 police, the largest metropolitan police force in the world.

“Delhi is not safe and secure for women and the situation is deteriorating,” Kumari told AFP.

“Most of these incidents have been reported in lower income areas like slums and densely populated areas, where mostly migrants stay. These men live in crammed spaces with no social or parental control and usually no fear of law,” she said.

The fatal gang rape of a young student on a bus in Delhi in 2012 led to an outpouring of anger over frightening levels of violence against women.

Experts say those figures likely under-represent the true scale of the crimes.

This is shameful and brutal. If you are female in India, you are not safe any longer. The police basically say they just can’t (read won’t) provide security for women there. And the refugees just keep pouring in. Especially into the slums. They have no morals and in fact are encouraged to commit these atrocities in the name of Allah. They’re only infidels after all. Children are constantly kidnapped and raped there. Rape gangs are common and the grooming of children for prostitution is rampant. These children are raped over and over, sometimes beyond repair. Then they are left bloody and torn to die. The majority of these demonic acts are committed by Islamists. India has become a Jihadist hell hole. God help them.