SHOCKING MOMENT Caught On Video, When Child Bride Meets Her Husband – Her Response? No Words…

I have always considered[1] the prearranged marriage model to be abhorrent. Especially the marrying of children. It’s obscene, especially in Islam where the marriage is actually consummated with these children. Child marriages in India, according to Indian law, is a marriage where either the woman is below age 18 or the man is below age 21. Most child marriages involve underage women, many of whom are in poor socio-economic conditions. It’s heart wrenching to watch some of these little girls break down in tears and look on in horror as they are forced to marry men, sometimes decades older than they are. Footage of this wedding ceremony was taken in Chittorgarh, in Rajasthan, northern India. It shows a mass child marriage with young brides crying as they are wed. According to UNICEF, India is home to 33% of the world’s total child brides. 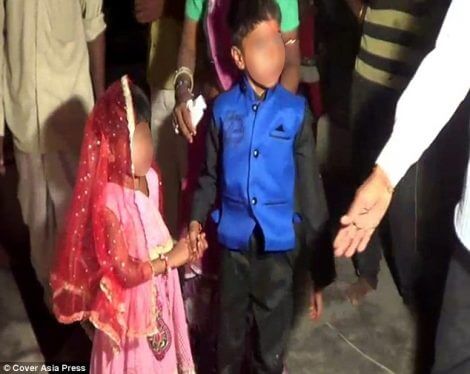 A lot of liberals in America like to complain about Western culture and how racist, sexist and homophobic[3] it is. However these people really don’t understood how good life is in the West unless they look at some of the other places on the planet truly horrifying.

The U.K. Daily Mail[4] reported that police in India have started a manhunt after a video has gone viral on the Internet showing child brides[5] breaking down in tears at their mass wedding ceremony.

The video shows multiple children at the ceremony. One of the girls is believed to be as young as 5 years old, and is being married to an 11-year-old.

In another clip, a priest who is conducting the Hindu ritual, is also seen scolding the children for crying. Six marriages took place in two days around the Akshaya Tritiya, a Hindu festival believed to be auspicious for child marriages in rural India. All the families that were part of this rite are now on the run as this is illegal in India. Child rights activist Kriti Bharti said, “The police should have acted immediately as the video clearly shows a priest was involved. Action should not only be taken against the families, but each adult involved in the ceremony including the decorators, caterers, attendees and relatives.” Child marriages are still shockingly common in India, despite being illegal. Parents often trade away or sell their children for money or power — condemning their children to a life of misery and torture in the process. It’s barbaric and must stop. Not just in India, but throughout the Middle East and the civilized world.