Well, this is certainly violent.[1] This McDonald’s worker has long, beautiful hair. Some thug in a car drives up to the drive-thru, lowers her window and stands up in her seat calling out the girl manning the window. Meanwhile, she has a bud recording the encounter from the back seat. The two get in a fight and the scum in the car reaches out, grabs the girl by the hair and drags her out the window into the side of the car. That person needs to be charged with assault and sent to jail. That poor girl’s head hit that car really hard and she was left lying on the ground. Then the abusers sped off in their car leaving the girl on the tarmac. No other details are available. This is a sad statement on the condition of our culture currently. 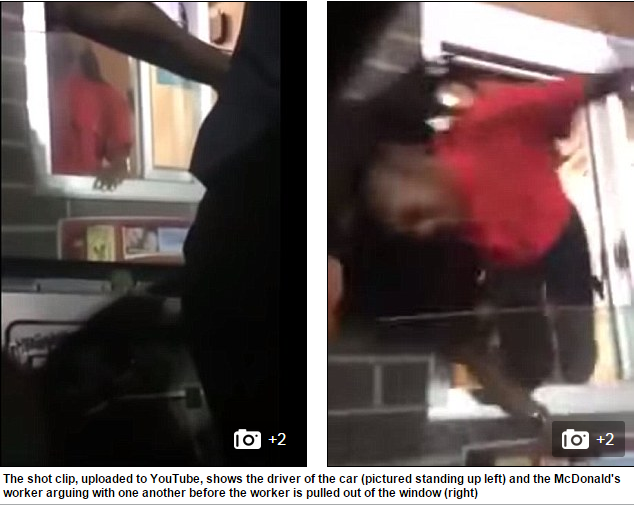 A shocking video has emerged showing a McDonald’s worker being dragged out of a drive-thru window by her hair during a heated argument with a customer.

The footage, which seems to have been taken on a mobile phone, shows the painful moment the worker’s head hits the side of the vehicle before she is left lying on the floor.

It is not yet known where or when the footage was shot, or what the row was about, but the pair appear to be fighting before the film starts, with the driver shouting: ‘Come on, b****.’

Standing up in the driver’s seat, with the video taken from the seat behind, the attacker, who appears to be female, shouts some inaudible comments before launching her attack.

Grabbing the female McDonald’s worker by her long hair, she drags her out of the service window and into the side of her car, when a loud thud is heard.

The worker does not appear again for the remaining seconds of the clip, and seems to have been left lying on the tarmac between the restaurant and the car.

Someone else can then be heard yelling: ‘Get out, Quita. Get out. Open the door!’ before the video cuts out.

Would you let your kids work at McDonald’s anymore? I wouldn’t. Those workers aren’t allowed to be armed and they are at the mercy of criminals and thugs who come up to those windows. Everything seems to be an excuse for a fight and violence these days. This was just pure viciousness. I hope that McDonald’s had a security camera rolling and caught the incident along with the license plate. Whoever that was needs to be tracked down and dealt with. They are a menace to everyone out there. I just hope the girl that was attacked is okay. This is just abhorrent gang-like thuggishness.