Jorge Ramos is a flaming racist[1] and is for the wholesale invasion of the United States. He pretends to be a journalist, but in reality, he is a revolutionary for the illegal immigrant movement fostered by Barack Obama and Mexico. Ted Cruz (R-Texas)[2] introduced “Kate’s Law,” the Establishing Mandatory Minimums for Illegal Reentry Act of 2015 as a companion to legislation introduced in the U.S. House of Representatives by Rep. Matt Salmon (R-Ariz.). The bill is named for Kate Steinle, the 32-year-old woman who tragically died in the arms of her father on a San Francisco pier after being shot by an illegal alien who had several felony convictions and had been deported from the United States five times. Illegal aliens who are deported and return to the United States would receive a mandatory five year sentence in a federal penitentiary upon conviction. Ramos deliberately obfuscates the terms immigrants and illegal immigrants because in the end, he doesn’t want any of them to follow the law or be held accountable. No matter how many die because of it. 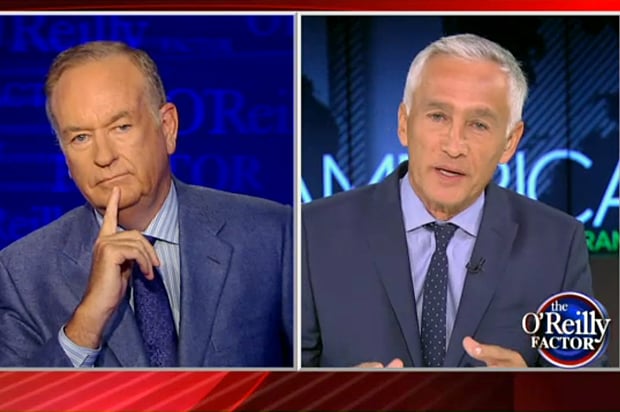 Social media users are furious that Jorge Ramos, the illegal immigration activist who masquerades as a journalist, came out against a law named in honor of a woman killed by an illegal alien who’d been deported from the country five times — and returned every time.

Speaking to CNN’s Brian Stelter in an interview to air Sunday on “Reliable Sources,” the Univision anchor declared Kate’s Law, which dictates that a deported illegal alien caught sneaking back in the country, would receive a mandatory five-year prison sentence, is unfair.

“I think it is unfair that because one undocumented immigrants killed a wonderful human being, that all immigrants are being blamed for that killing,” he said. “It is so unfair.”

Ramos is, as usual, confusing all immigrants with illegal immigrants.

“It is completely unfair to criticize millions of people for what one or two people have done,” he said.

Really? Yet when the push to wipe out the entire history of the South began because one evil white kid, Dylann Roof, who once held a Confederate battle flag in a picture, killed nine innocent black people in a Charleston church, Ramos didn’t offer a similar defense.

Television shows have been pulled off the air, major retailers have removed any product that contains the flag, statues are being removed and schools are being renamed all because of that one person’s actions.

Where are you on that Jorge?

Social media, meanwhile, was enraged by Ramos’s take on the law. 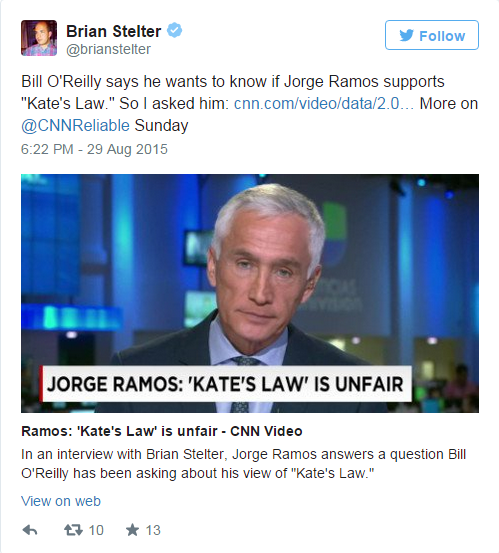 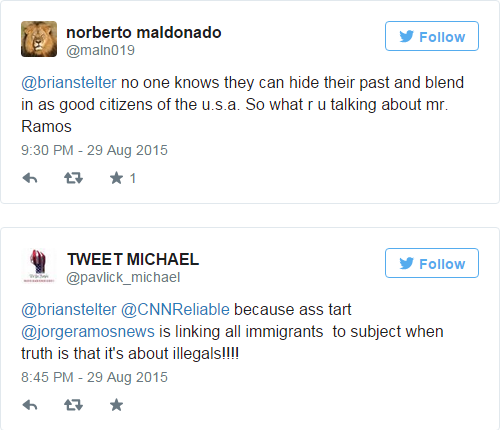 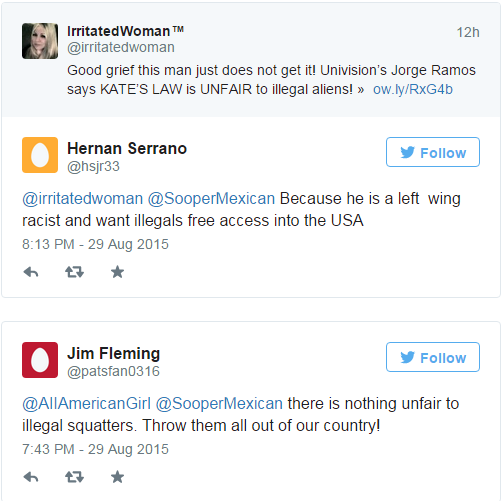 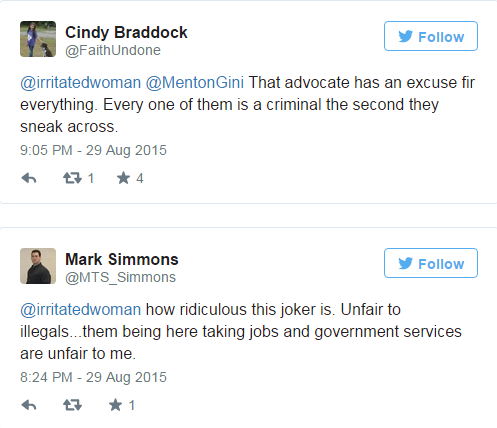 Now, Ramos is whining that Kate’s Law is just so unfair! Social media had a meltdown and raged over his comments as was appropriate. The comparison above to what Ramos is bellyaching about and to what is happening to the Confederate flag is very apropos. We are blaming illegal aliens for crimes they are committing. Many of these criminals have lengthy rap sheets in Mexico. They are coming here by invitation many times, to rape, torture, brutalize, rob and violently accost American citizens. Of course Ramos doesn’t support Kate’s Law… he supports criminal illegal aliens. America welcomes immigrants who come here legally with open arms, but illegal aliens are criminals and should be treated as such. And knowingly bringing rapists and murderers into our midst in the name of diversity is a crime in itself. Jorge Ramos is a walking free advertisement for Donald Trump, Ted Cruz and border control.