Their article overlooks the studies by John Lott[1], author of More Guns, Less Crime and keeper of statistics regarding firearms and violent crime. His figures, obtained from no less source than the FBI, make it clear that the safety of everyone improves with the increase of private gun ownership. His writing also debunks all of the favorite Liberal anti-gun tropes and lies. As Breitbart points out, officers are not shot by law-abiding people and attempting to somehow conflate legal ownership of firearms with the commission of violent crimes using firearms, is absurd on its face. The study’s numbers are skewed and biased as usual. It is another propaganda piece aimed at stripping Americans of their constitutional right to be armed and to put us at the mercy of criminals and our government. Not much difference there these days. 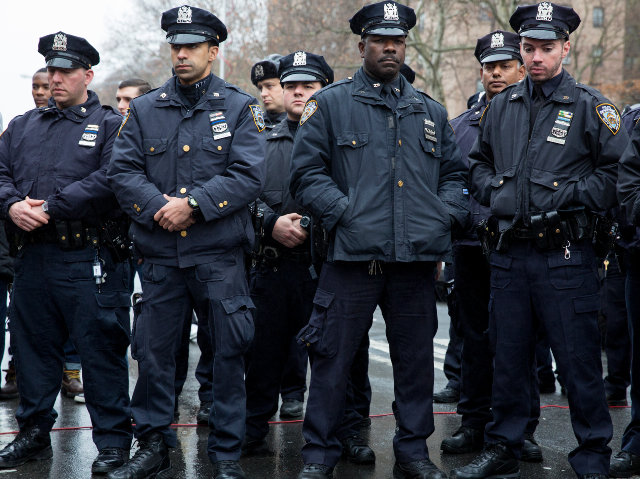 A study released by the American Journal of Public Health, and published by The Huffington Post[3], claims high private gun ownership rates are tied to police officer deaths.

That’s a ratio of 23 to 8, which by itself makes an attack on a police officer nearly three times as likely in a high gun versus a low gun state not because of gun laws, but simply because of the significantly larger amount of area represented by states with high gun ownership.

Moreover, the study was conducted during the years 1996-2010, which means it missed the fact that New York’s gun control got even stricter beginning in 2013–discouraging gun ownership even further–yet many of the most prominent officer shootings in recent memory took place in NYC.

For example, NYPD Officers Wenjian Liu and Rafael Ramos were gunned down in an ambush attack on December 20, 2014, while sitting in their patrol car. And on May 2, 2015, NYPD Officer Brian Moore was fatally wounded[4] with a stolen gun. He died on May 4.

But these attacks on officers were not part of the American Journal of Public Healthstudy.

Also, while suggesting states with high gun ownership are more dangerous for cops, theJournal did not differentiate between those who killed officers with guns that were legally obtained versus those who shot officers with guns that were stolen or otherwise obtained. For example, when Officers Benjamin J. Deen and Liquori Tate were shot and killed in Hattiesburg, Mississippi, on May 9, 2015, two of the suspected gunmen[5] were felons–completely barred from gun possession. They faced 100 percent gun control. Nonetheless, they figured out a way to obtain guns.

Just as the gunman who shot NYPD Officer Moore with a stolen gun, the deaths of Deen and Tate do not show the dangers of armed law-abiding citizens, but the determination of criminals to obtain guns at any cost–laws be damned.

Ultimately, the focus of the American Journal of Public Health study is misplaced. Law-abiding citizens who are armed for self-defense pose no threat to police officers. And laws that prevent such citizens from being armed for self-defense simply create an atmosphere where only the criminals are armed–with guns that are stolen or otherwise obtained.

All Americans should be armed. It would cut down on crime drastically and fewer officers would be put at risk. More lives would be saved as well. As I’ve said many times, if a criminal wants to hurt someone, they will find a weapon if they don’t already have one… either on the black market or an item close at hand. Basically, both the American Journal of Public Health and The Huffington Post are knowingly lying here and putting forth a ‘cooked’ study that is misleading and nothing more than government-mandated pablum for the masses. They go after the conservative states, while touting the Liberal Progressive ones as the ones to model after with gun control. By sheer coincidence, those Liberal states are also the most violent in the nation. Go figure.