Suge Knight — Hit and Run Victim Cries on the Stand and says I Ain’t Snitching!

You’ve got to be kidding me[1]. Suge Knight runs over this moron and his friend… killing his friend and badly breaking him up as well and suddenly he decides that he won’t snitch. That it’s really his fault his friend is dead. Never mind the car that ran over them was driven by Suge Knight. This is whacked. The joke is by saying he won’t snitch on Suge, he actually gives credence to his guilt. Wonder who got to the guy and what he was threatened with. 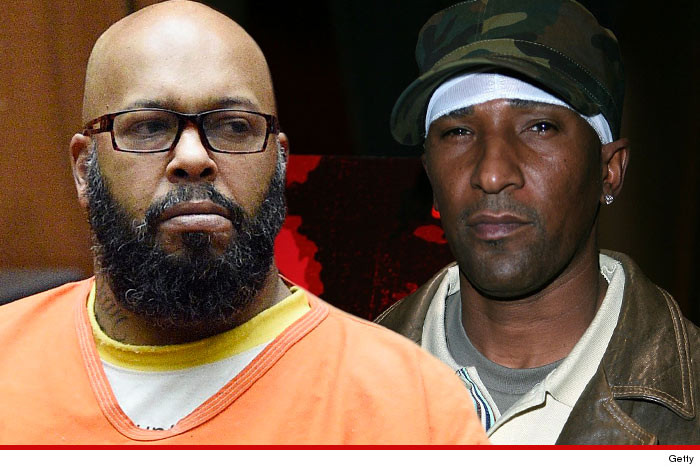 The man who got run over by Suge Knight[2], and survived, tearfully testified in court that he would not “snitch” and help prosecutors put Suge in prison.

Cle “Bone” Sloan was called to the stand during Suge’s preliminary hearing Monday AM, and the prosecutor raised the topic of snitching.

Sloan got emotional and declared he “doesn’t want to be used to send this man to prison.” He added, “I screwed up and Terry’s dead.”

It’s amazing … the guy who was laid up for weeks with two fractured ankles, two torn ligaments in his knees and a shoulder injury from Suge plowing over him — took the stand and tried to take the blame for Terry Carter’s death[3] … seemingly taking some heat off Suge.

But what Bone giveth he taketh away, because by saying he wouldn’t snitch and help put Suge in prison, by definition he’s saying Suge did bad things that should land him in the big house.

Just to refresh your memory[4], prosecutors say Knight traded punches with Sloan through the window of his vehicle before putting the truck into reverse, knocking Sloan and another man, Terry Carter, to the ground. They say he then pulled forward to run over both men. Yep, Suge is just sooo innocent here. You’ll be equally surprised that Sloan describes himself as an “inactive gang member.” Right. If convicted, Suge gets 25 to life – Sloan must have had a personal visit from a rep from the gang and coincidentally changed his mind and testimony. Unfortunately, Carter is dead and you can’t change that. Suge is in for a lifetime of orange fashion statements.