Horror out of the blue and totally unexpected.[1] A 75-foot pine tree fell on eight children at a day camp in Southern California. It was a sunny day with mild winds. The only warning was a cracking sound as the tree inexplicably toppled over. Two children were critically injured and there is no word yet on how they are. They were rushed to the emergency ward and witnesses say they were bloody and strapped to gurneys. Their parents must be beside themselves and just out of their minds with worry over this. Emergency personnel cut through tree limbs and foliage to get to the children and pull them out. All children and staff are accounted for. The worst can happen in an instant – no one saw this coming or ever expected it.

A 75-foot-tall tree fell in Southern California near a children’s museum as a camp was wrapping up for the day.

A 75-foot-tall tree that fell in Southern California near a children’s museum as a camp was wrapping up injured eight children – at least two of them critically – according to fire officials in Pasadena.

It is not known what caused the 75-year-old pine to uproot around 4.45pm on Tuesday, just outside the Kidspace Children’s Museum near the Rose Bowl in Brookside Park.

Witnesses said the tree made a cracking sound and came down on the young campers just as they were starting to head home.

Museum staff, firefighters, parents and police quickly converged on the scene, according to KABC[3].

The casualties were loaded onto gurneys and stretchers and transported to Los Angeles County+USC Medical Center.

The Fire Department’s urban search-and-rescue team to used power tools to cut the tree limbs apart to see if there were other victims.

Two were taken to a hospital in critical condition, although their conditions could change after doctors evaluate them.

All the children were alert and able to talk, she said.

Rescuer Greg Prodigalidad said: ‘I saw the tree fall on top of the little kids, maybe about five or seven of them.

‘I ran over there with a bunch of parents and we just started going through the tree and the bushes and we started pulling them out,

‘My heart was beating thinking about my own kids.

‘I just went out there and I tried to save as many as I could.’

An injured camper, Vincent Lim, said he ‘bumped into the tree’ and it was ‘scary’.

Hanna Lin of Altadena, who volunteers at the museum, said her daughters, ages six and seven, were at the camp.

‘I myself saw two children carried out on stretchers and they were pretty bloody. That brought tears to my eyes,’ she said.

‘Apparently they were doing arts and crafts directly under the tree when it fell on them.’

It was unclear what made the ancient pine topple on a warm, clear summer day with minimal winds.

California is in the midst of a severe drought that has persisted for several years.

It wasn’t immediately known if that could have played any role.

‘We are bringing out an independent arborist to investigate what could have caused this,’ Derderian said.

The museum says 33 children ages six to eight were attending day camp and that all camp staff, campers, volunteers, and guests have been accounted for, according to NBC Los Angeles[4].

Kidspace said in a statement: ‘At this time, City of Pasadena officials have secured the scene and are investigating what may have caused the incident.

‘Thank you to the City of Pasadena first responders for their quick action and support, along with our Kidspace community and parents who helped immediately following the incident.’

Kidspace should be open on Wednesday.

Tim Scheidler, the museum’s marketing manager, said, ‘It was the end of the day, so there were people gathered outside who were leaving and there was a camp group waiting for pickup by their parents when the tree came down.’

There are a lot of reasons that tree could have keeled over. Anything from earthquakes, to the drought, to a bug infestation, to rot could have caused it to upend. It’s a rare occurrence and this was not those kids’ lucky day. But they survived – they were very, very fortunate. You can bet that Governor Moonbeam will spin this as a result of climate change regardless of the facts. I can already hear the shrill cries of the global warmists proclaiming this event is apocalyptic. The emergency crews did a fantastic job of rescuing the children I understand. We never know what each day holds for us and things like this just happen. This time, no one died, thank goodness. But I’ll bet they look at trees differently for a while. This is not a good way to remember Summer Camp. 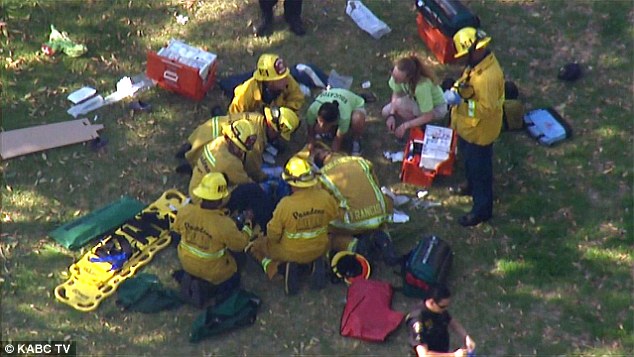 The falling tree injured eight children, at least two of them critically, according to fire officials in Pasadena.