What sheer hypocrisy.[1] The Swedish Nationalists deliberately marched their Gay Pride Parade directly through a Muslim majority neighborhood in Sweden. They were poking the Islamic badger and they did not disappoint. Predictably the Muslims won the fight with Leftists turning on Leftists – calling the Swedish Nationalists racists. Huh? First off, not agreeing with a religion, in this case Islam, is not racist. It’s a theological difference of opinion. Otherwise, we’d be filing suits against those so fond of drenching Christ on the cross in urine for hate crimes. Muslims don’t like the gay movement. In fact, being gay in a Muslim country is downright unhealthy… it will get you hung, beheaded, crucified or thrown off the nearest tall building to adoring throngs that belong to the Religion of Pieces. But if the Left has to choose between gays and Muslims, it looks like they choose the Soldiers of Allah. They choose keeping their heads over fashion every single, craven time. 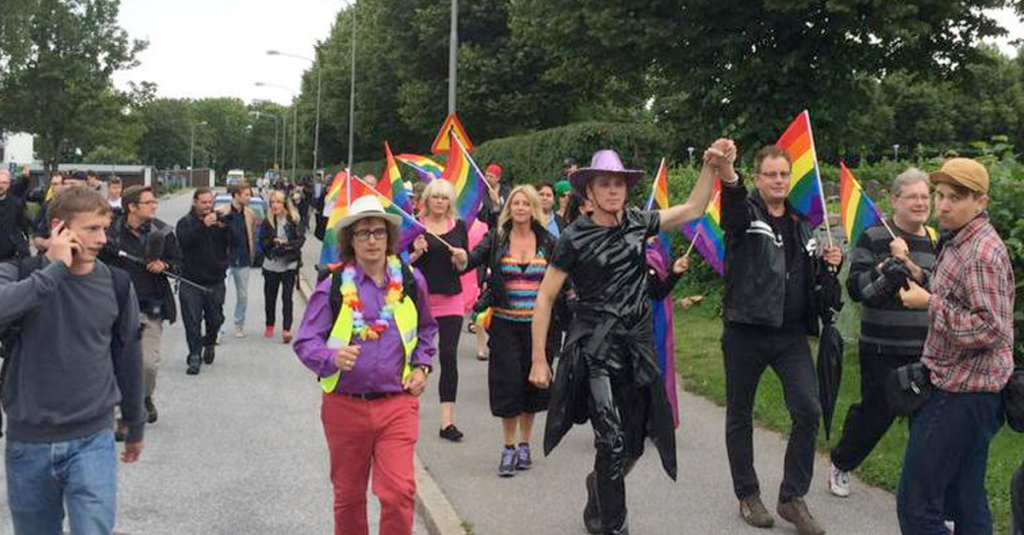 What happens when two of the left’s favorite “oppressed” pet groups (LGBTQ and Muslims) collide?

Last month the Swedish nationalists planned a gay pride parade (featuring everyone’s favorite day time entertainment, gay public kissing and/or heavy petting) and routed the parade through two Swedish Muslim districts of Tensta and Husby. For those of you who’ve been living under a rainbow-painted rock, Muslims don’t like gay people. And not in the, “Ew it’s gross when two men kiss, make it stop,” kind of way. No, no, Muslims will kill gay people for being gay. Or because they’re jealous of their fashion sense. Just kidding, Muslims just kill gay people for all the gay reasons.

But as much as leftists champion equality and compassion, one group came out on top… Um, I mean one group won.

Three guesses as to which group got ahead? Yep, the group associated with beheadings, gay-hangings and slamming airplanes through skyscrapers. Whoops, I mean, the religion of peace. PEACE, yo.

Here’s where it gets rich: the gay marchers were branded racists by the ‘Swedish Federation for Lesbian, Gay, Bisexual and Transgender Rights.’ That’s right, a fellow group in gayness didn’t have the gay marchers’ backs. Whatever happened to gay solidarity, united under one glorious, oiled-up rainbow flag? Perhaps the Federation for LGBT were just a tweensy bit nervous about losing their heads… or getting blood on their boas.

Two residents of the Muslim area said the gay pride march, “pits two oppressed groups against each other.” Like that’s something liberals never do… Noted athiest blowhard Richard Dawkins also noted the homosexual vs. Muslim game:

What’s the takeaway from this liberal vs. liberal social experiment? If you want preferential treatment from liberals, be associated with the religion that repeatedly abuses women. Or be associated with the religious group that tries to kill you for drawing a cartoon. Or if you really wanted to fall into liberal favor, just be a gay muslim. At least no one will accuse you of racism or homophobia as you’re strung up and hanged.

Want to play the gay vs. Muslim game at home? Try getting a gay wedding cake made in a Muslim bakery and witness the deafening liberal silence.

The ‘Swedish Federation for Lesbian, Gay, Bisexual and Transgender Rights’ are the biggest hypocrites of all. Sweden has fallen to the Islamists and has lost its mind. This week a mother and son went shopping at an IKEA in the kitchen wares section. A new Muslim immigrant grabbed a knife and beheaded the mother and killed the son. IKEA’s response? They banned knives saying they hoped that would quell the urge to murder. I kid you not. Sweden’s response? Why, they sent the police out in force to protect the Muslim community from ‘dark forces’ in the country. Looks like Muslim extremists are running the country and everyone is running from them and hiding. The gay community seems to be over the rainbow for Islam in Sweden and quivering stylishly under their IKEA beds.