This girl is truly inspirational[1]! What a love for life and singing… her rendition is enchanting and comes from deep within her soul. The determination for a Down Syndrome individual to sing like this is truly humbling. It takes the heart of a warrior to persevere regardless of your handicap – Madison does just that and more. I understand why her parents are so very proud of her and I am sure her singing reaches the ears of God and the angels above. It really touched my heart and moved me as well. She shows more discipline, courage and sincere joy than you see in the majority of humans. Madison – I applaud you and I think you are awesome! 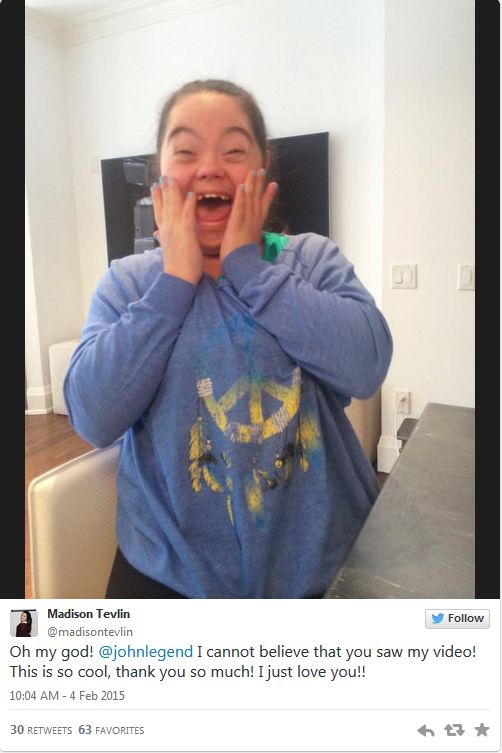 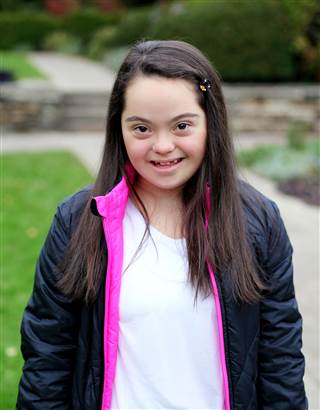 Credit: Nechama Laitman
Despite having Down syndrome, Madison Tevlin has honed her singing voice and created an amazing cover of a John Legend song, which has gone viral.

When Madison Tevlin was born, her parents were told by one doctor that Down syndrome[2] may keep her from talking one day and mentioned the option of putting her up for adoption or into a home. Her mother, though, saw her baby’s great smile and knew she was somebody special.

“That twinkle in her eye, I saw it at 2 months,” says her mom, Grace Tevlin. She told her infant daughter: “‘Let’s do this. Let’s see what you got.’”

Fast forward 13 years after being raised to know no limits, and Madison is now the star of a viral video as she belts out John Legend’s hit “All of Me.” With more than 5 million views since the video was posted on Jan. 20[3], she’s showing not just her parents, but fans everywhere just what she’s got.

“She’s accomplished singing ‘All of Me,’ and touched the world with it,” Grace Tevlin said. “Her voice is being heard. Madison is just shining here and she’s touched so many people and taken a stigma away.”

It seems that the seventh grader from Toronto is accomplishing her goal to inspire people, as messages have poured in from all over the world from people saying the video has given them hope and inspiration. The video, made over the summer when Madison was 12, even caught the attention of Legend himself[4].

How does it feel to know so many people have heard her sing?

What she wants people to learn from her singing is that no matter what you want to accomplish, just have faith in yourself.

“I want them to know they can be confident in themselves, believe in themselves,” Madison said. “You can do it no matter what you think. Just go for it and do it if you really like it.”

“Every time when I sing, I feel so confident in myself,” she added. “I want them to feel the same way.”

Madison loves Legend’s music and was thrilled when she learned he knew about her.

“When I knew John Legend retweeted my video, I got so excited,” said Madison, who hopes to be a singer and actress when she grows up. She tweeted[6] him: “Oh my god! @johnlegend[7] I cannot believe that you saw my video! This is so cool, thank you so much! I just love you!!”

John Legend watched the video and retweeted it as well. That was a thrill for Madison and shows what a great person Legend is. As for all of the negative haters commenting on the video… you guys are trolls and should slink back into your holes. This child is far more human and far more talented than any of you will ever dream of. She is an inspiration for millions. Madison proves that no matter who you are, if you really want to accomplish something, you can. And you can do it with enthusiasm and grace.