What a monstrous thing to do[1]. Lately, I’ve heard story after story of pizza delivery drivers being attacked in one form or another. This one shows just how horrific one of those attacks can be. A woman trying to make a living, was allegedly accosted by Miles with a gun, forced back into the car and made to drive somewhere else. According to police, Miles brutally raped and sodomized the woman and then made her drive him home. His father says it was consensual. Right. I’m sure the doctors could tell by tearing and other wounds that it obviously was not consensual. He is being held on $6.4 million bail – which should give you a clue just how bad this was. 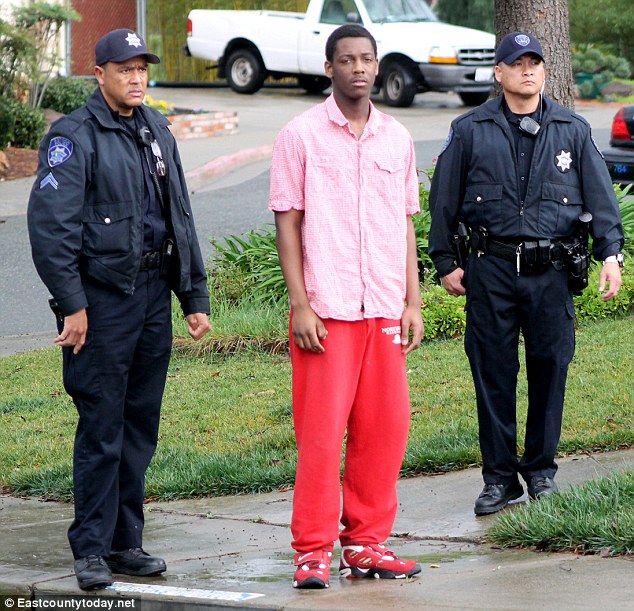 Suspect: Darrion Miles, 17, is facing life in prison after being arrested on eight felony charges including sodomy and robbery charges following the brutal attack on the female employee in Antioch, California, on Sunday. He is being tried as an adult because of the ‘serious nature’ his crimes.

A teenager who allegedly kidnapped and raped a Domino’s pizza delivery driver at gunpoint was supposed to be under house arrest and wearing an ankle monitor at the time, authorities have said.

Darrion Miles, 17, is facing life in prison after being arrested on eight felony charges including sodomy and robbery following the brutal attack on the female employee in Antioch, California, on Sunday.

Police say he approached the 22-year-old with a gun as she drove up to a house in the quiet Blue Bell Circle and told her to get back in the car.

He is then believed to have forced her to drive to an undisclosed location where he sexually assaulted her.

Miles, who was wearing the GPS tracker for violating probation following a fight last summer, then made the victim drive him home half a mile away before she called the police.

The teenager was arrested and booked into jail a short time after the incident, according to East County Today[2].

Contra Costa County prosecutors are charging him as an adult because of the ‘serious nature of his crimes’ and he is currently being held on $6.4 million bail.

Authorities have said they will be able to pinpoint his exact location at the time of the attack using the ankle monitor.

Darrion Earl Miles, the boy’s father, insists his son is innocent. He told KRON News[3] his son does not have a gun and believes there was consensual sex between the pair.

He added the boy would not have had time to drive from his home and attack the woman in the time frame that has been reported.

‘My son said he didn’t do nothing and I’m going to believe him until they prove otherwise,’ he said.

In a separate interview with Bay Area News[4], the father admitted his son wasn’t an angel and brushed off questions about gang-related messages posted on his Facebook page.

He added: ‘I’m not going to give up hope because we got the best lawyer in the world and His name is God. Until my son is proven guilty, I’m in his corner.’

Miles made his first court appearance on Wednesday in a green prison jumpsuit. The judge postponed his arraignment until February 18.

Domino’s vice president of communications Tim McIntyre told the Daily Mail Online that in his 30 years at the company, he has never experienced a similar incident.

In a statement he said: We are shocked and horrified by what happened. We couldn’t conceive of something like this happening, especially on a Sunday morning.

‘We will be working with the franchise owner to provide the victim with whatever kind of support she needs. It is unthinkable that something like this could happen to an innocent woman, simply trying to earn a living.

‘We are grateful for the Antioch Police Department’s swift action and we hope the person who committed this heinous crime is prosecuted and punished to the fullest extent of the law.’

Miles is no angel according to his dad. And he has gang affiliations. If the 17 year-old is found guilty, and I am almost certain he will be, he will get life in prison. I believe that California currently does have a death penalty, but they are so Progressive there, I highly doubt they would use it. Especially since no one was murdered. That doesn’t take away from the fact that this dirt bag deserves the needle if he is convicted.