Teenage girl who viciously beat and held her friend down to be raped, returned to jail after bullying victim online [Video]

This girl is sheer evil[1]. Such a beautiful girl hides such an ugly soul. Avery and another girl, along with three boys, beat this girl, kicked her, pepper sprayed her and then held her down so the boys could take turns raping her. Avery was 15 at the time. She got caught accessing the Internet on a smart phone and has now had her bail revoked. The other girl got four years, with two years of probation for turning on the others. Avery could make a similar deal. She’s an animal that should be locked away forever – they all are. Just because they are underage, doesn’t meant they aren’t sociopaths. 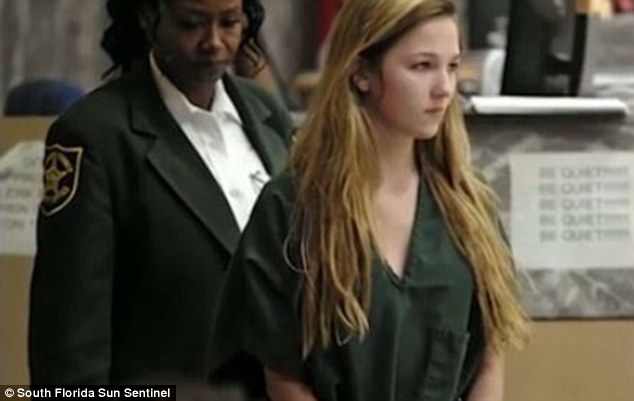 Erica Avery (center) was cuffed and hauled out of a Broward County courtroom
Tuesday after being accused of using the internet, which itself violates the conditions
set just one month prior when she was first released on $100,000 bond (here, she is
pictured at a prior court date). 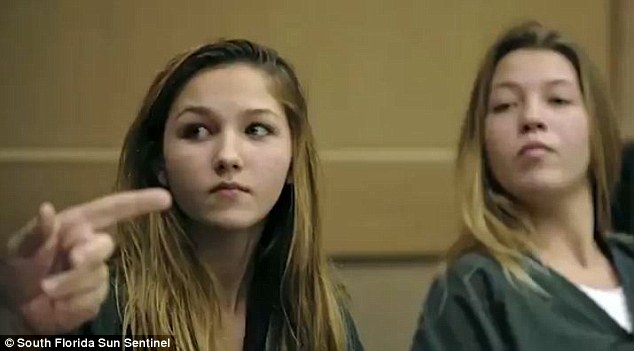 Avery, here with her co-defendant Patricia Montes, are accused of punching,
kicking and pepper-spraying the girl before holding her down to be raped by Woolfork.

One of several Florida teens accused of ganging up on a friend by allowing her to be sexually assaulted was thrown back in jail Tuesday for allegedly breaking the conditions of her pre-trial release by threatening the victim online.

Erica Avery was cuffed and hauled out of a Broward County courtroom after being accused of using the internet, which itself violated the conditions set just one month prior when she was first released on $100,000 bond.

Prosecutor Maria Schneider said photos of the 17-year-old were posted to social media and one of them shows her using a smart phone, reports the Sun-Sentinel.[2]

Avery and four other teens are charged with armed sexual battery and kidnapping in connection with the 2013 assault on a victim in Hollywood, Florida.

Not long after their arrest, cell phone video emerged showing Erica Avery and her friend Patricia Montes leering over the victim as she writhed half naked and wept in the yard of the home of Jayvon Woolfork.

Montes and Avery are accused of punching, kicking and pepper-spraying the girl before holding her down to be raped by Woolfork.

On Tuesday, Avery’s attorney told the court it was her sister, not Avery, who sent the victim messages.

‘My client has assured me that at no point in time did she access the Internet,’ Weinstein said. ‘How is she supposed to control what her sister did?’

The barbaric attack was filmed on a cell phone by Lanel Singleton. Along with Dwight Henry, the alleged rape gang have all been charged in the attack on November 1, 2013.

The sickening clips shows the girls viciously beating the girl while the men watch.

One male voice can be heard saying: ‘They don’t like this girl.’

One girl responds: ‘I told you we were gonna f*** somebody up’.

As the victim begs to be freed, another girl says they should ‘let this girl go home’ but the attack continues.

Montes on Monday pleaded no contest and was sentenced to four years in prison followed by two years probation as part of a deal in which she’ll testify against her co-defendants, writes the Sun-Sentinel.

Avery could take a similar deal.

The victim told police that she was attacked after smoking marijuana and drinking beer with people she believed to be her friends, including one girl who had been her best friend since kindergarten.

The victim claims that she was kicked, thrown down stairs and had her face smashed on concrete, breaking bones near both her eyes.

The videos, consisting of 11 snippets, show the victim being beaten, but they do not depict sexual activity.

One of the girls had been the victim’s best friend since kindergarten. As the girl laid half naked, weeping and begging in the yard of one of the rapists, Avery leered at her. The girls obviously enjoyed helping the boys rape her. The bones in her face were broken against concrete after she was thrown down a flight of stairs. How can a judge let these monsters off so easily? Next time, they’ll kill someone and smile while they do it for kicks. The moronic rapists filmed the whole assault which sealed their guilt. Just horrific. Avery blaming her sister for accessing the Internet is laughable and shows what a demon in a child’s body is like. I don’t care what their ages are – they should be tried as adults. Florida – you should know better.