I love it when Texas flips Obama off![1] Once again, Texans are floating the idea of secession. Tanya Robertson is trying to get it on the ballot there, but is well below the 75,000 signatures needed to do that. The independence of Texans is inspiring, but secession would not work. First off, the federal government would never allow it. Yep, I know that sounds unconstitutional, but that is the blatant truth. Second, as stated below, the Supreme Court outlawed secession in 1861. That being said, if Texans got it into their heads to do it, they would and they would fight to the bloody end. Alamo much? An easier solution is to elect true leadership in Washington and start impeaching and arresting those flaunting our laws. Obama’s at the top of that list. 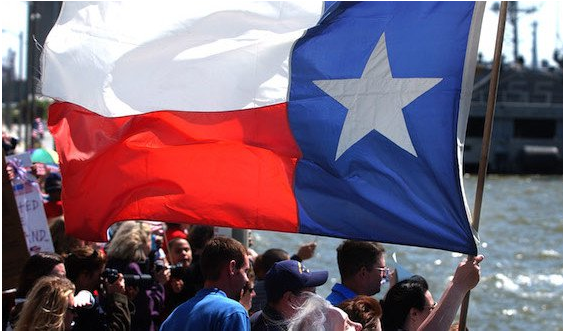 More and more it seems that Americans are feeling as though our country today barely resembles that of the great nation it once was.

The idea of a Texas secession has been thrown around for years, but most of the time it is said in jest. Well, this year Texas Republicans have a plan to put “secession” on the primary ballot.

Tanya Robertson, a Texas State Republican Executive Committee member, has brought the issue up once again as she feels many of her constituents would support a Texas secession.

“There’s been a big groundswell of Texans that are getting into the Texas independence issue. I believe conservatives in Texas should have a choice to voice their opinion.”

Texas GOP Chairman, Tom Mechler, doesn’t believe that the resolution will make it on the ballot, as he doesn’t believe there is enough support for Texas to declare its independence. Plus the fact that in 1861 the U.S. Supreme Court outlawed secession, so if Texas were to do so, it probably wouldn’t happen peacefully.

The group needs 75,000 signatures in order to get the resolution on the ballot, but currently finds themselves well below that mark. While it may be an entertaining thought, the fact of the matter is an independent Texas looks very unlikely.

I’m sure that most of the state is disgusted with Obama and the Beltway Boys. I know I am. Texas also has its own problems in Austin and Dallas. They’ve been infected with Progressives and need to clean house. Governor Abbott is a great guy, but there are a lot of politicos there that aren’t. We don’t need to split up as a nation. We just need to elect true conservatives to right this ship. One of Texas’ own, Ted Cruz, would be a really great place to start. He would be epic as president or vice president. And he’s not going anywhere anytime soon, much to the dismay of both the Left and the Right. Texas still leads the way and they should keep poking the Marxist badger. Someone’s gotta do it and Texans have a spine and they are armed… just my kind of patriots.