Texas ranchers are hitting back[1] after being blamed by activists for the deaths of illegal aliens on their lands. They come over the border illegally and die from the elements on their land. Not to be heartless, but if they weren’t breaking the law in the first place, that wouldn’t happen. Some mentally challenged human rights activist says “hundreds die in the brush.” And every one of them broke the law and trekked into the desert on those ranches. The activists complain the ranch owners won’t allow search parties to traipse across their properties looking for these people. Well, why the hell should they? The police and the border patrol have access to their lands. They don’t want people they know nothing about roaming all over the place out there. When a body is found of some unfortunate soul, the county covers the burial expense. It should not be the responsibility of the ranchers to patrol their lands for illegals. It’s dangerous and that is why we have the police and the border patrol in the first place. Try securing the border and this will stop. 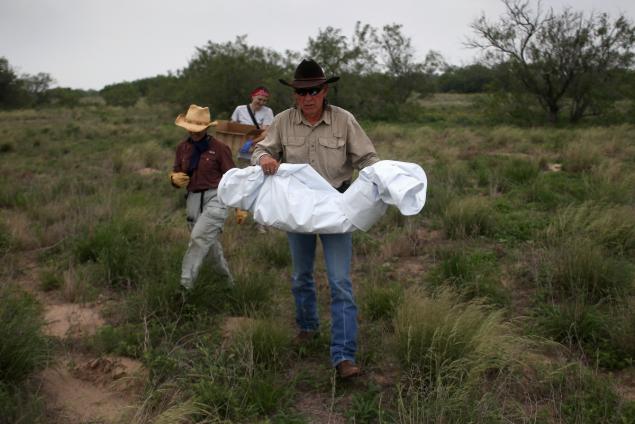 Brooks County Sheriff’s Department Chief Deputy Benny Martinez carries the human remains of a suspected undocumented immigrant that had been scattered across a ranch in southern Texas.

In CHANNEL 5 NEWS Special Report: “Paying the Price,” we reported how a Honduran woman went missing on private ranch land in Brooks County.

Human rights activist Eddie Canales said the woman is one of hundreds who die in the brush. He said the biggest obstacle to finding remains of missing people is getting access to do searches on private property.

Landowners are speaking out about being associated with the number of people dying. The count of bodies found this year in Brooks County so far is 41.

“We just think the landowner shouldn’t take the blame on this,” Susan Kibbe said. She represents most of the landowners in Brooks County. She’s the director of the South Texas Property Rights Association.

Kibbe said the deaths that happen on the vast ranches are tragic, but property owners don’t deserve any blame.

A Honduran woman went missing on one of the largest ranches in south Texas. We tried to contact the landowners to get permission to be on the property. No one called back.

Kibbe said the owners called her after our report aired. She said Border Patrol and the local sheriff’s office have access to the property. No one else has the right to be there.

“So we really feel like the landowner is doing all they can that’s reasonable, that they know it’s law enforcement doing on their property,” she said.

Kibbe said people dying on ranches are not the biggest problem. “This is after the fact. This is a symptom of the overall issue,” she said.

The main issue Kibbe said is people in the country illegally are fleeing from their homelands. She said human rights activists should change their focus from the ranches to Central America.

“I think if they want to help these people, they need to go down and help them in their countries,” Kibbe said.

The South Texas Property Rights Association is calling on congress to secure the border, enforce current laws, reform immigration laws and create a guest worker program. Kibbe said those things will keep people from dying. Congress has that power, not landowners.

What most people don’t know[3] is that the border ranches in Brooks County are protected by unpaid volunteers, patrolling mostly in the dark of night, doing the job our government refuses to do. And yet, these ranchers are being blamed for the deaths of criminals. These ranches have now become some of the most dangerous places in the country. They can’t be sold because of that. More than 300 people died crossing through Brooks County alone between 2011 to 2013 — representing more than 50 percent of the deaths in Texas’ sprawling Rio Grande Valley. The deaths are a byproduct of not slamming shut the border and lawfully processing immigrants. The blood of these people is all over Barack Obama’s hands, not the ranchers. Follow the damned law and make our country sovereign once more before someone parks a nuke on the White House lawn. Congress needs to seal the border and do their job period and they need to bypass Obama on it.