This one might not be for everybody, but it’s…well, it’s something[1]… 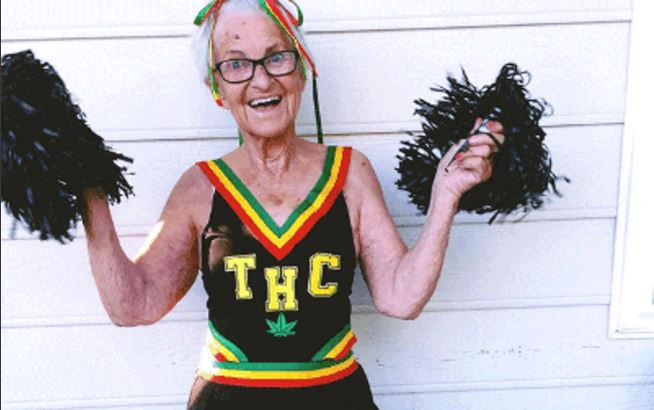 She’s building her brand by being provocative, flashy and sometimes controversial — all at 87 years old.

Winkle, whose real name is Helen Van Winkle, shot to social media fame last year when her great-granddaughter, 19-year-old Kennedy Lewis, posted a photo of Winkle in cut-off jean shorts and a tie-dyed shirt on Instagram.

“Kennedy would come home from school every day, and she would say, ‘gram, come look, you’re up 20,000 today'” recalls Winkle. “I mean, it just kept going.”

1.7 million Instagram followers later, she’s attracted fans from around the world. Her vibrant and, at times, controversial style has garnered the attention of fashion designers — who send her their most out out-there duds for her to model.

She’s doing a lot. Brands are flying her in for appearances at events in Los Angeles, Las Vegas and New York. She’s walked the red carpet at the MTV movie awards, appeared on Nicole Richie’s VH1 show ‘Candidly Nicole,’ and will be featured in Paper Magazine’s ‘Break the Internet’ issue, made famous by Kim Kardashian. Winkle can make up to $5,000 for a paid post on Instagram.

Social media influencers can make up to $10,000 a post, according to Thomas Rankin, CEO of Dash Hudson, a company that helps brands monetize on Instagram. “Every brand we talk to has made Instagram its #1 priority,” said Rankin. “We estimate brands will spend up to $1.5 billion on native advertising on Instagram next year.”