The Anti-Police, Race Rioter Who Threatened to Kill “Innocent White Kids” Gets Some Major Bad News

If you are stupid enough to post on Facebook, social media or any site for that matter, that you intend to kill cops and white children, you deserve to be hunted down. This dirt bag is lucky he’s still breathing. Warrior, my arse. Another wannabe cop-hater, a racist and someone who gets off on killing little children. What a winner….[1] 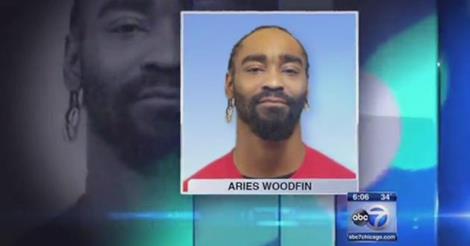 An anti-police, race rioter[3], felon in Illinois was recently arrested by Chicago police after posting several disturbing, racist, anti-police messages on his Facebook account that quickly received the attention of Chicago PD.

33-year-old Aries Woodfin was arrested at a suburban Chicago home where he “stayed” part of the time. During the arrest, police found a handgun, ammunition and a homemade gun range. The owner of the home claimed that the handgun was hers – though Woodfin had been arrested in 2000 for illegal handgun possession.

What prompted the arrest was his insane message[4] that he posted on Facebook in which he boldly claimed he was going to “kill cops and innocent white children” to avenge the deaths of Eric Garner and Michael Brown.

Woodfin’s threat was not unlike what the black Jihadist gang member posted before assassinating two NYPD officers[5] while they sat in their patrol car eating lunch. (H/T thegatewaypundit[6])

Not only did he post the threat of violence, but he accompanied the post with a picture of young white children – making his intent seem very real and dangerous.

The homeowner, Beatrice Franklin, tried to cover for him again by saying, “He was expressing how he felt, which is what everyone else was doing on Facebook as well, expressing themselves. They were ranting and they were raving.”

Posting that you’re going to kill white children and police officers after what’s happened in the past few weeks is far beyond “ranting and raving,” Ms. Franklin.

One police source told reporters that when Woodfin was arrested at the home, he told police that he was a “warrior” and that the “streets would run red with blood.”

The race rioter was charged with felony possession of a firearm, possessing a firearm without a permit, disorderly conduct, and misdemeanor assault charges.

Given his previous charges, that should be enough to put him away for a while.

We salute the police officers who caught this violent race rioter[7] before he acted on his threats.

The police were Johnny-on-the-spot with this one and good for them. He was a ticking, time bomb and it looks to me as though he would have really gone out to kill officers and children after getting his nerve up. The woman protecting him is just as evil as he is and someone should keep an eye on her too. The world has turned upside down and morphed into a dark, wicked and dangerous place as of late. Protect yourselves and that especially goes for our warriors in blue.