The Army disciplines a chaplain for mentioning God

If you are going to have a Chaplain in the Army teach a suicide prevention class[1], how in the world don’t you expect for him to mention God? That is what he does and it is how he views the world. The flyer he gave out obviously was from his point of view and said it was just one option for handling suicide. If this had been another faith… oh say, Islam, there would have been no problem. But an atheist just could not tolerate the mention of a Christian God. Not only militaries, but entire civilizations fall into the dust of history over such selective constrictions and admonitions. 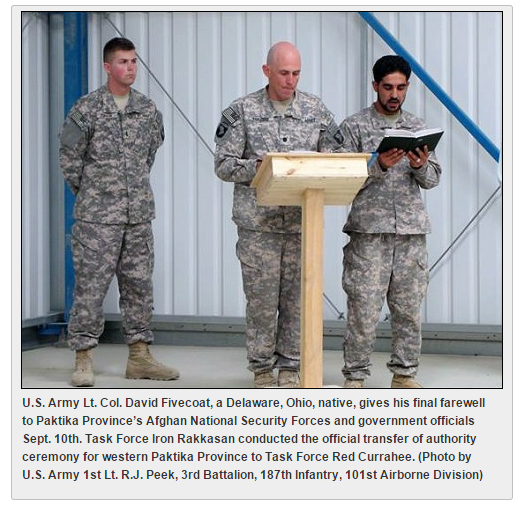 Now my Army has outdone itself.[3]

Traditional values groups are rallying around an Army chaplain who was rebuked by his commander for distributing information on Christianity during mandatory suicide prevention training.

Twenty nonprofit organizations dedicated to religious freedom have signed a letter to Army Secretary John McHugh, urging him to overturn action against Capt. Joseph Lawhorn, an evangelical and onetime infantryman.

His commander, Col. David Fivecoat, who heads the brigade at Fort Benning, Georgia, that molds new Rangers, issued a “letter of concern” on Thanksgiving. He took action after one soldier complained to the website MilitaryAtheists.org, which posted an article.

Capt. Lawhorn had spoken and distributed one page of religious material to soldiers Nov. 20 on how his faith helped him overcome bouts of depression. Suicide in the ranks has been a major Army problem amid deployments to long wars in Iraq and Afghanistan.

What Chaplain Lawhorn was not proselytize. He distributed a one page flyer to soldiers attending a mandatory suicide prevention class that on one side listed Army resources available, on the other was his personal testimony of his struggle with depression[4] and how religion aided him.

Lawhorn says his role in the military is to bring a sense of “encouragement and hope” to soldiers from a religious or spiritual perspective. So when he received an official complaint for doing just that, Lawhorn was surprised.

“When I spoke about faith in particular, and in particular my Christian faith, it was clear that I was speaking from [a] first-person account,” he says, adding:

In my particular situation, it was my faith that helped me to persevere and remain resilient in the face of depression. And I was very clear to my audience that that was one way to handle depression and thoughts of suicide, but it certainly was not the only way.

As for the handout given at the mandatory briefing, Lawhorn says it was “completely optional.”

“I made it clear from the beginning of the class that … any handout or any resource I provided soldiers who might need help was completely optional,” he says. “It was up to them whether to take it or leave it.”

This is an absolute violation of First Amendment free speech and religious freedom. But in today’s Progressive Army, mentioning God is the sin and shunning Christianity is the noble action. If you can’t turn to God to argue against suicide, you might as well tell the person to have at it… that none of it matters any way – they are just a piece of meat. God argues for and defends our souls… our beings. The Army is doing all it can to squish us as creatures of God, as they kneel in obeisance to Barack Hussein Obama and his hatred for all things Christian.