The Note A Stranger Handed A Young Boy SHOCKED His Mother

We’ve all had THOSE days. Days where everything that can go wrong, does[1]. But one woman who was having a day of her own, received something from a total stranger that turned everything around.

Melissa Simms was having one of those days, times 10. The Pell City, Alabama, mother had taken her son to the doctor and realized that she didn’t have enough money for the insurance copay.

That’s when a good Samaritan[4] came to the rescue and made Simms’ day — and thousands of other people’s days, as well.

According to WBRC-TV[5], Simms had gone to the doctor to follow up on a series of surgeries the mother had undergone. She’d brought her seventh-grade son Trey along with her, since he was home sick from school.

“Me and my husband woke up and split out last $10 for gas, for him to go to work and for me to make it to my doctor’s appointment,” Simms said. “All day I was stressed about how am I going to make supper for my kids.”

That’s when the strange woman came up to her son and handed him a note, pictured below. 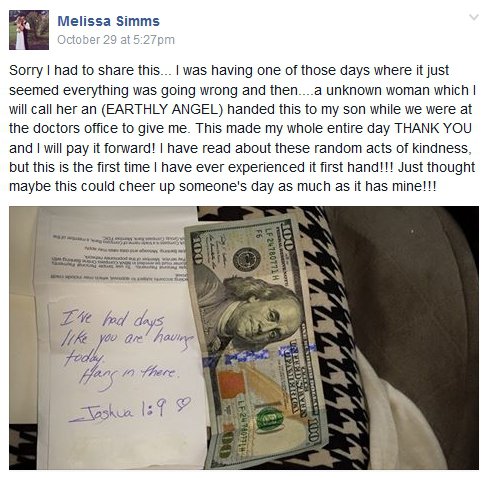 We need more kindness like this in the world.