Just unbelievably, tragically sad[1]. Such a beautiful little girl and such wonderful, loving parents. The babysitter turned out to be a murderous monster. When it comes to sitters, they chose poorly I guess. But how could they know? What kind of beast murders a three month-old baby by bashing its head? I hope that South Carolina hits this demon with everything legally they have. They have the death penalty in that state and should use it here. Such a brutal act committed against a child deserves nothing less than death. The parents will never fully recover from this. 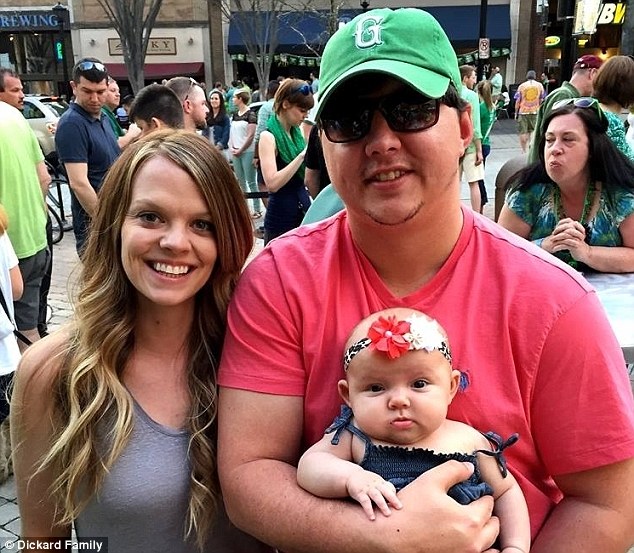 Loved: The baby’s parents, April and Matt Dickard, pictured, have been married
for six years and had long hoped for a family. Relatives called Everly, pictured, the couple’s
‘most beautiful miracle’.

A three-month-old girl who allegedly suffered head injuries at the hands of her babysitter – just a day after her mother returned to work – has passed away.

Everly Dickard, from Boiling Springs, South Carolina, died in hospital on Monday – more than a week after she stopped breathing while in the care of her babysitter, Katie Harris, on March 20.

Harris, 32, had been looking after Everly just a day after the child’s mother, April, returned to work following her pregnancy, according to a gofundme page set up for the family.

‘Everything was on the right track for this family until the phone rang Friday morning,’ the page reads. ‘Everly had stopped breathing at the sitter’s house and was being rushed to the hospital.’

She had suffered injuries including a build up of blood clots beneath her skull and hemorrhages inside her eyes, and medical staff told authorities the injuries were non-accidental, WSPA[2] reported.

After Everly was admitted to hospital, staff called police and the Spartanburg County Sheriff’s Office opened an investigation into possible abuse.

During the investigation, officials say Harris admitted that she had originally lied about how Everly was injured and said she had actually fallen from a baby swing, WYFF4 reported.

Following inconsistent statements, Harris agreed to take a polygraph test, which she failed.

Harris was charged with abuse inflicting great bodily injury upon a child on March 23. Once the baby’s autopsy has been completed on Tuesday, the charges could be upgraded.

Her lawyer, Robert Ianaurio, said she maintains her innocence.

The family’s gofundme page, which has raised $28,000, calls Everly ‘the most beautiful miracle’ for the couple, who have been married for six years and had long hoped to have a family.

‘Her parents have adored and loved this precious baby from the second they met her,’ it said. ‘They have covered her with kisses and done everything right to love and protect her.’

The page, which has not been updated since the news of the baby’s passing, called it ‘the hardest time in their lives’ and asked for prayers for the family.

For six years this young couple tried to have a baby. They were finally graced with one and only had her for three months. In today’s economy, both parents had to go back to work. So, they entrusted their precious baby to someone they thought they could trust. Someone who murdered a child in cold blood. It took the little one a week to pass, but that doesn’t change the murderous fact or intention here. Harris lied repeatedly, changed her story and then failed a polygraph. I highly doubt the innocence she proclaims. Medical staff say the injuries were non-accidental – it took this monster just one day to kill their baby. Let’s return the favor.