When I saw this, profanity ensued. What kind of sick, twisted dirt bag does this to an innocent dog? Figures it happened in Mexico where dog fighting is rampant, but it could have just as well happened here. This helpless pup may lose her litter now. Her jaw is shattered, palate and tongue burned, and she has been basically tortured. That culminated in the scum putting a firecracker in her mouth, taping it shut and setting it off. She fears all humans now and with good cause. The poor thing will never be the same and those that did this to her should be the recipients of aggressive and brutal payback.[1] 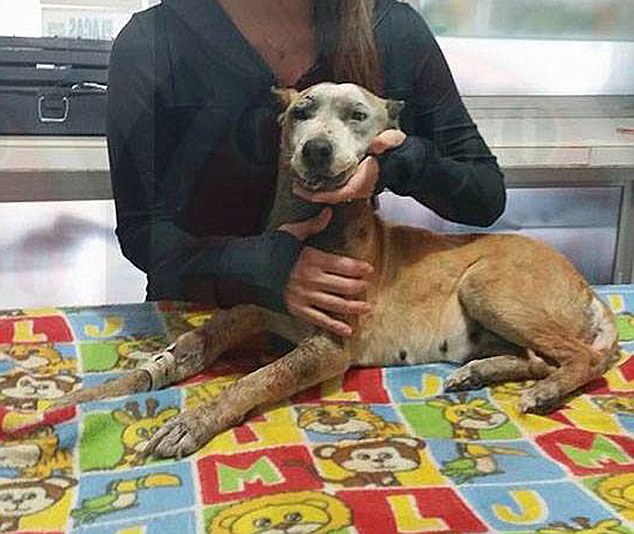 Vets believe Chola may have been used to train less aggressive breeds to fight before becoming pregnant.

Cruel thugs taped a pregnant dog’s mouth shut around a firework before lighting it, shattering the animal’s jaw.

The dog, which had been seriously abused before the attack, was left with missing teeth and burned fur.

Vets caring for the animal, which they have named Chola, in the Mexican city of Torreon, fear she may now lose the litter of puppies she was carrying.

They believe the animal was being used to train less aggressive breeds as fighter dogs before becoming pregnant.

It is likely her abusers were trying to kill her when they discovered she was no longer of use to them, vets said.

‘She was very badly hurt, it looks as if she may survive now but will no longer be able to have a life on the street and may well still lose the puppies,’ said Vet Miguel Davila.

‘Many of her injuries such a torn ear are old ones. We believe she was used as bait in dogfights but then became no use when she got pregnant.’

The Animal Protection Association is offering a reward for anyone who might be able to identify those responsible for the attack.

‘We have given her a name, called Chola, but to be honest we are avoiding as much contact with her as possible as she is extremely nervous of anybody that she doesn’t know well,’ said Rebecca Reyes, director of the Association.

‘She cannot swallow any food because her palate was burnt badly together with her tongue and so we have to feed her baby food liquidised.

‘She also needs painkillers constantly and unless is tranquillised does not allow herself to be examined.

‘The explosive device that she had in her mouth not only shattered part of the jaw but knocked out several teeth. It is lucky it didn’t go into her lungs, somehow they seem to have been unhurt.’

Local police are appealing for donations to help pay for the dog’s surgery and ask anyone with information about the attack to come forward.

When she was no longer useful to those utilizing her to train dogs to fight, they tried to kill her. Such a sweet face and an innocent soul should never have been subjected to such barbarity. Cruelty doesn’t begin to cover it here. Burned fur and missing teeth, along with all the other abuses are readily seen by just looking at Chola. Monsters behave in such ways. It’s a miracle she even survived. I hope the police track down those responsible and deliver a commensurate level of justice to the perpetrators.