For a very long history of criminal behavior[1] and then running down two men in a fast-food parking lot, killing one of them, I think $25 million in bail is just about right. And the attorney claiming that Suge Knight is being treated worse than Charlie Manson[2]? Please. Did anyone stop to think that Suge refused food and just didn’t take his medication? If he was not given food or his diabetic meds, that is one thing… but I kind of doubt that happened. It’s always all about the poor victimized criminal. This is the second time he has collapsed and while he may not be faking it, he certainly could have engineered it. 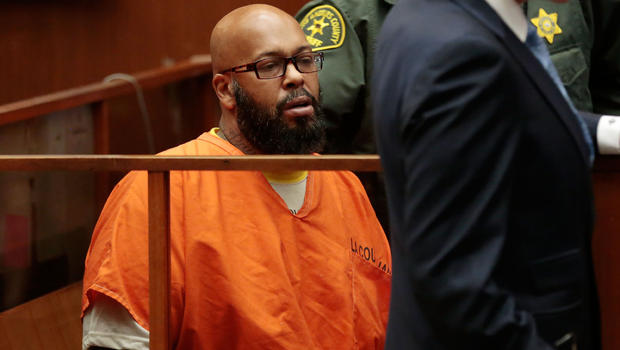 LOS ANGELES (CBSLA.com) — Former rap mogul Marion “Suge” Knight’s bail was set at $25 million on Friday during a hearing in the murder case filed against him.

After a judge granted the bail request made by prosecutors, Knight fell inside the courtroom and hit a table, which knocked him unconscious.

Paramedics rushed him to a hospital by ambulance. His condition remains unknown at this time.

Fletcher added being locked up has taken a toll on client, who did not take his medication or eat anything since yesterday.

The 49-year-old has been held without bail since Feb. 2, when $2 million was revoked shortly before he was charged with one count each of murder[4] and attempted murder, along with two hit-and-run counts, officials explained.

He is accused of deliberately running down two men in a fast-food restaurant parking lot in Compton, located near the set of Universal Pictures’ “Straight Outta Compton.”

Terry Carter, 55, was killed in the incident and actor Cle “Bone” Sloan, 51, suffered injuries to his foot and chest, authorities said.

Knight’s attorneys claim the co-founder of Death Row Records acted in self-defense during the incident.

On Thursday, officials filed court documents that described Knight as a career criminal who committed crimes that date back to 1987.

CBS2’s Louisa Hodge explained prosecutors could not ask that he be held without bail because no special circumstance allegations were filed against him.

Hodge added that prosecutors had 295 pages of court documents on hand to support their request if needed.

The hearing began around 8:30 a.m. in downtown Los Angeles.

Knight’s attorney said officials have scheduled the preliminary hearing to be continued on April 13, regardless of his health.

For the murder charge alone, Knight could face a potential sentence of 75 years to life in state prison.

I find the defense argument that Suge Knight mowed down those men in self defense, specious and laughable. He was on bail[5] in a robbery case when he ran over the men as well. He evidently figures the law doesn’t apply to him. He just kept escalating his criminal behavior right up to murder. The man is an uber extortionist… what makes people think he would tell the truth about anything at all? Knight was a key player in the gangster rap scene that flourished in the 1990s, his label once listing Dr. Dre, Tupac Shakur and Snoop Dogg among its artists. Knight lost control of the company after it was forced into bankruptcy. He hangs out with the creme de la creme of thugs. No sympathy for the devil here. Throw the book at him and make it a big one.