Truck Driver Gets Ambushed by Muslim ‘Refugees’… He Gives Them a NASTY Surprise!

I don’t blame this truck driver at all[1] for the way he feels. Look at these men! Not a woman or child among them. They brazenly jump on these trucks and attack these drivers. The police do nothing. It would have served them right if the driver had plowed into them. Below you will see a very graphic video with colorful language showing just what contempt this driver has for the refugees. He was driving his truck from France to Britain when this happened. The driver goes on about how these migrants left their wives and families at home alone to fight ISIS while they came to destroy Europe. This is the Hijrah migration and it is what Obama is bringing to America by the hundreds of thousands. 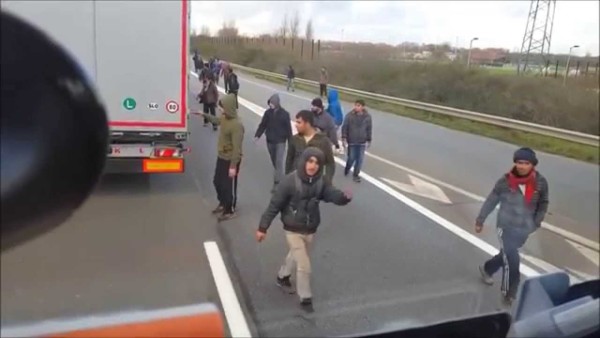 A truck driver headed for the United Kingdom from France[3] delivered an epic rant while in his tractor trailer before he swerved his rig to scare migrants walking on the shoulder.

The video, which was posted to YouTube [4]on Friday with English subtitles, shows the truck going through the traffic to get through the tunnel that will take him and other trucks to England.

The approach to the tunnel in Calais has been the site of much controversy[5], as many migrants have resorted to violence or self-smuggling in order to get themselves across the border into Great Britain.

The video begins with multitudes of migrants — all young men, much to the consternation of the media who have tried to paint the migrant crisis otherwise — walking down the shoulder of the highway. While they do that, the truck driver delivers a rant (which is extremely obscene when translated into English — consider this fair warning!) against the “refugees.”

“There is a lot of them again,” the driver says. “Here are the kids. Hello! Why don’t you sons of b*****s go back home and fight? Your women got the weapons and fighting against … ISIS! F*** you!”

Things begin getting hairier as more and more refugees come, with some of them trying to “board” the man’s truck. He tries his best to keep them off, though.

This goes on until about the 4:50 mark of the video when a huge group of refugees is clogging up the shoulder. Seemingly beyond frustrated, the driver swerves towards them. While dangerous, it seems mostly like it was meant to scare them. However, one of the refugees picks up an object and hurls it at the truck’s windshield.

Video below (again, the language is VERY graphic):

Eventually, the driver comes upon the police, who are with a larger group of refugees up the road.

“Look! We need a line of policemen to defend the highway from these filthy bastards!” the truck driver exclaimed.

A scary incident which shows just how dangerous and chaotic the border at Calais is. And this is what our president wants to import into America?[6]

Do you think this driver went too far? Or, did he do the right thing, since he was being boarded by dangerous refugees?

I don’t think the driver went far enough by the way and I think this is going to get a lot bloodier and more violent. Who can blame them? Someone should be protecting these drivers from these thugs. This is disgraceful. Can you imagine dealing with this here in the United States? We will be soon. It’s terrifying. Better be armed and ready at all times. Things get dicey very fast under these conditions. This gives car jacking a whole new, darker meaning. They actually tried to pull one driver out of his truck, no doubt to steal it and maybe kill him. How can anyone think this is normal or acceptable? Those are not refugees, that’s a freaking army.