Damn. That’s one punk that just got owned[1] and deservedly so. The big guy, a trucker, took offense when this thug beat on a woman and got in his face with a very private invitation. The giant not-so-gently explained to the woman beater that hitting on a woman is not the way to get your point across and if he ever does it again, the big guy will personally deliver a violent beating upon this loser. This was after the monster yelled at his alleged wife and then started to choke her right there in the Waffle House. I agree with Uncle Rufus… we need more men like this that are willing to stand for others and do the right thing, no matter how dangerous it is. However, I don’t think this bully will ever learn his lesson. Unless of course it’s from a prison cell. 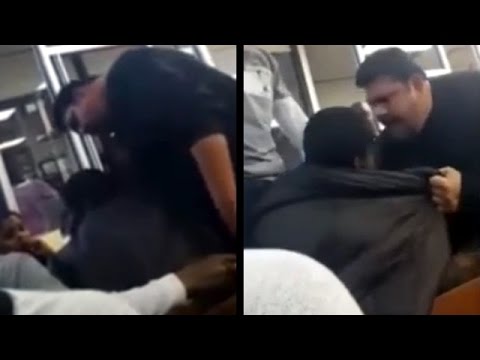 Big Badass Trucker Destroys…That big man is a hero. He should never have to pay for his food again at Waffle House. Too bad there aren’t more people in this world like him. As for the woman beater, let’s hope he learned his lesson about hitting women.

What I fear is that once this jerk got home with his wife/girlfriend, he beat her for embarrassing him. That’s what animals like this do. They blame the victim. And she’s to blame as well – she needs to get out there. If she has kids, she just needs to go. There are places she can go to before it’s too late for her and the kids. Because sure enough, if she doesn’t, one day he’ll take it too far and beat her to death. The idiot’s friend that stood up for him at the Waffle House is probably a violent bully as well. Thugs of a feather… That big ole’ trucker is a hero. According to his wife he’s Hispanic and a disabled Gulf War Veteran. He’s also a really good guy and not someone that a cowardly woman beater should mess with.