US Sheriffs To Americans: There Are NO Answers In DC – We Take Back Our Country At The Local Level!

I have long admired the Sagebrush Sheriffs.[1] These are lawmen who believe in the Constitution and stand by it unabashedly. They have joined forces to take a stand against the overreach of big government. They are also known as the Constitutional Sheriffs and rightly so. They stand against things like bullying by the FDA, the BLM and by DHS. These are good men and women who believe in the letter of the law and in doing what is right. “The County Sheriff: America’s Last Hope,” was written by Richard Mack and published in 2009. In it, he argued that because sheriffs are the “last line of defense,” it’s their duty to protect individual liberties from being choked away by an out-of-control federal government. Mack was one of the prime leaders of a movement that later transformed into the “Tea Party.” I have been a proud member of the Tea Party since it began. 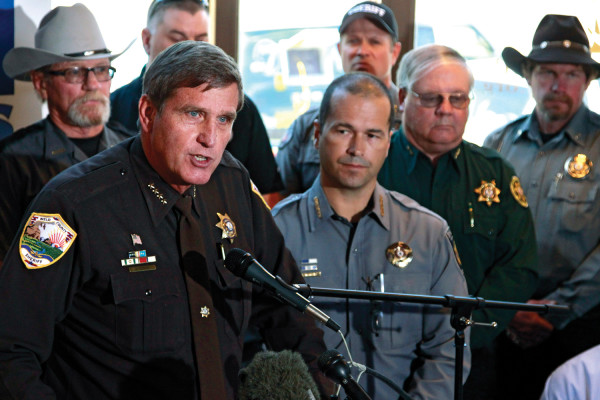 Local governments have been frustrated[3] by President Barack Obama and his administration’s liberal policies that have crippled this great country.

One group of lawmen, known as the “Sagebrush Sheriffs” have decided that they won’t sit back and watch their country ruined. Instead, they have banded together to stand up to the big government that has tried to run them over.

The “Sagebrush Sheriffs” are also known as “constitutional sheriffs,” and they use their positions as the ultimate local law enforcement authorities to fight detrimental environmental regulation, run federal officials out of their counties, and, when necessary, break the law themselves, according to High Country News[4].

Sheriff Mack is a former sheriff out of Arizona. He believes that sheriffs can lead the fight to rescue America from the “cesspool of corruption” that Washington, DC has become by refusing to enforce federal and state laws that they deem unconstitutional, such as road closures by the Bureau of Land Management and certain gun control regulations. According to Mack, sheriffs have the power to nullify federal authority by preventing unconstitutional laws from being enforced. It is a form of civil disobedience that has risen because of persecution and lawlessness that comes from our own government. One way these sheriffs have fought back against an overbearing federal government came in the form of a letter to Obama, written by 28 of Utah’s 29 county sheriffs. “No federal official will be permitted to descend upon our constituents and take from them what the Bill of Rights — in particular Amendment II — has given them,” the letter read, according to HCN. “We, like you, swore a solemn oath to protect and defend the Constitution of the United States, and we are prepared to trade our lives for the preservation of its traditional interpretation.” These sheriffs are strong proponents of the Second Amendment. “There is no solution in Washington, D.C.,” Mack summed up. “If we’re going to take America back, it’s going to be at the local level.” True enough and the fight goes on by groups such as the Sagebrush Sheriffs, the Tea Party, Oathkeepers and the Three Percenters.