HOLLY HILL, Fla. — Eddie Colosimo is a Marine Corps veteran who runs a bar and grill. He’s also the President of Bikers for First Amendments Rights; so obviously, we’re talking about a man who takes his right to free speech very seriously. 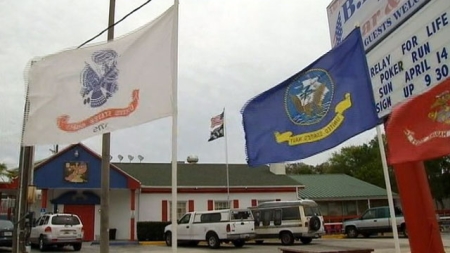 For the last couple of years at his restaurant, Colosimo has been flying flags honoring veterans on the week-ends. However, the city of Holly Hill has passed a new ordinance and is now threatening to fine Colosimo $300 a day for his flags.

Not only is Colosimo refusing to back down, he’s upping the ante by flying his flags every day instead of just on the week-ends.

He also added, “You’re going to tell me that I can’t honor them….show respect for them?” Colosimo continued, “I’m sorry; bring your handcuffs. I’ll go to jail. I don’t care.”

Additionally, he added, “Please don’t try to tell me my Army, Marine Corps, Coast Guard, Air Force flags are flutter signs, and compare them to beer signs. That doesn’t fly!”

Holly Hill officials have announced that they’re going to have a special hearing on the matter and given that the American, POW, and state flag are already allowed under the ordinance, it would seem to be a no-brainer that other military flags should be permitted as well. On the other hand, maybe the city of Holly Hill does consider flags honoring the “Army, Marine Corps, Coast Guard, Air Force” to be comparable to “beer signs.” The voters in Holly Hill, Florida will find out soon enough and they should take it into consideration the next time they go to the ballot box.