I can’t imagine how terrified this poor woman must have been[1]. She sounded hysterical on the phone with 911 and I don’t blame her. She was on her way to dinner, when a man with a gun forced her to drive him 30 miles away. He then forced her out of the car and locked her in the trunk. I’m sure that running through her head during this whole nightmare was the threat of rape and murder. Instead… she was very, very fortunate to just get locked in her trunk. She still had her cell phone and the police came and got her out. Unfortunately, there is no sign of the thug that abducted her. 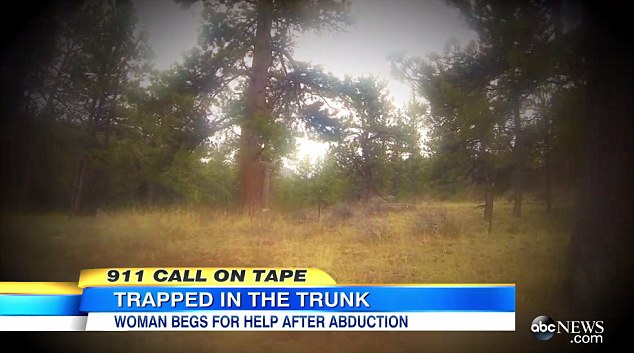 Estes Park officers responded and got the woman out after finding her car keys,
according to authorities.

Audio of a woman’s cell phone call to 911 — in which she said she’d been locked and trapped inside a trunk after an armed man had approached her — has been released.

The unidentified woman’s conversation with a dispatcher was revealed by ABC News[2].

The woman was allegedly kidnapped Thursday in a parking lot in Loveland, Colorado, police there said in a news release.

In the phone call, the dispatcher asked ‘911, what’s the address of the emergency?’

At one point, the woman told the dispatcher ‘I went to get some dinner…and someone came up to me and he had a gun.’

Loveland police said in the release ‘a woman in Estes Park […] had reported being forced into her own car (a blue 2013 Hyundai sedan) and abducted by a man at the Thompson Valley Towne Center parking lot in Loveland.

‘She said that she was forced to drive her own car to an area just outside Estes Park and was then locked in the trunk of the car.’

During the call, the dispatcher asked the woman ‘Are you still moving?’

‘He got out? And you’re not moving now?’ the dispatcher asked.

‘No. Is there anything I can do to get out?’ the woman asked.

Loveland police said that Estes Park officers responded and got the woman out, after finding her car keys.

Authorities said the woman told them she wasn’t hurt.

Though about sixteen people with the Larimer County Sheriff’s Office and the Estes Park Police Department scoured the scene, they ‘were unable to locate a suspect,’ police said.

Loveland police said tips can be called in to Detective Henry Stucky, by dialing 970-962-2032.

This woman was also lucky that the police found her car keys. The whole episode will haunt her for a very long time and probably make her paranoid. I know it would me. Parts of Colorado, just like every other state, are getting more and more dangerous. People need to learn to be cognizant of what is going on around them as much as they can and they really, really, really need to carry a concealed weapon for their safety and the safety of others. This man could have easily killed this woman – she was absolutely defenseless and at his mercy. I hope they catch the guy, but I wouldn’t hold my breath.