I stand behind this Police Chief 110%. He’s a brave, good man trying to deal with a horrible situation and you know what? He’s right. The majority of crime there and in most Progressive hellholes is black on black crime. Professional victims stalk the police accusing them of all sorts of heinous crimes, when they should look to their own communities where thugs, criminals and gangs are devastating their young people and neighborhoods. Let the cops do their job – when they do something that isn’t cool, call them on it… but stop attacking them on every little phone call and let them go on about saving your sorry asses[1]. 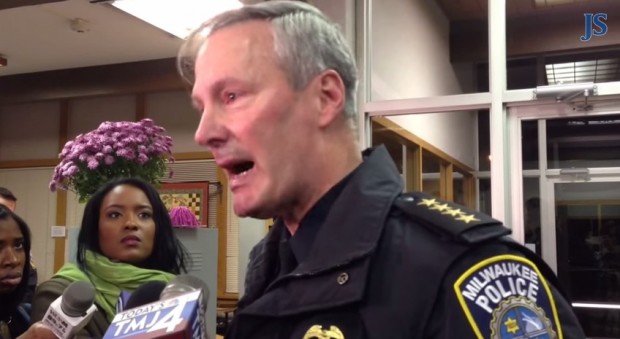 Earlier this month, Milwaukee Police Chief Edward Flynn was verbally attacked by protesters in his community for being on his cellphone during a Fire and Police Commission meeting related to the officer-involved shooting death of Dontre Hamilton, 31. When reporters confronted Flynn about the cellphone incident after the meeting, he not only revealed that he had a good reason to be on it, but he also went on a tirade about the “greatest racial disparity in the city of Milwaukee.”

“Well I was on my phone, yes. That is true. I was following developments about a 5-year-old girl sitting on her dad’s lap who just got shot in the head [3]by a drive-by shooting,” Flynn said angrily. “If some of the people gave a good goddamn about the victimization of people in this community by crime, I’d take some of their invective more seriously.”

“The greatest racial disparity in the city of Milwaukee is getting shot and killed — hello!” he added.

“Now, they know all about the last three people who have been killed by the Milwaukee Police Department in the course of the last several years. There’s not one of them that can name one of the last three homicide victims we’ve had in this city,” Flynn said. “But this community is at risk alright, and it’s not because men and women in blue risk their lives protecting it. It’s at risk because we have large numbers of high-capacity, quality firearms in the hands of remorseless criminals who don’t care who they shoot.”

Flynn then told reporters that he was going directly from the meeting to the crime scene where there was a dead 5-year-old child and that he takes these types of crimes “personally.”

“We are responsible for the things that we get wrong,” he said of his police department. “We’ve arrested cops, we’ve fired cops and so on. But the fact is, the people here, some of them, who had the most to say, are absolutely MIA when it comes to the true threats facing this community. It gets a little tiresome, and when you start getting yelled at for reading the updates on the kid who got shot, yeah you take it personally, OK?”

An uproar has occurred in Milwaukee because a cop shot a man who attacked him with his own baton. The man was schizophrenic and died from the shot. His family claimed he was not violent – really? He attacked the cop. Flynn fired the officer because he said the man was mentally incompetent and he did not follow procedure. I think that was a mistake, but I’m not Flynn and it isn’t my place to pass judgement. He’s doing the best he can with a very bad situation. No way should the officer be criminally charged, which is what the protesters want. This isn’t about the dead man – it’s about race. Another white cop shoots a black man in self-defense and the mob wants the officer’s head on a platter. That’s not justice – it is blatant racism and a lynch mob mentality. Police your own and let the cops do their damned job.