VIDEO: When She Mouthed Off To The Judge, He Knows Just How To Get Her Attention

Well, this is one teen who had it coming[1] from the judge. One of many, I’m sure, he sees on a daily basis. She’s hauled into court on drug possession. Her first mistake is laughing and giggling and then lying to the judge. When the judge tells her this is a serious matter, she keeps laughing and playing with her hair. On the first count, she is going to be fined $5,000. The judge then tells her she can go. But she derogatorily says ‘adios’ to the judge. He calls her back and asks her if she said that and she says yes. That gets her $10,000 and a shocked face. She then says it again and flips off the judge. He calls her back and gives her 30 days for contempt. Good for the judge and a hard lesson to learn for the girl. 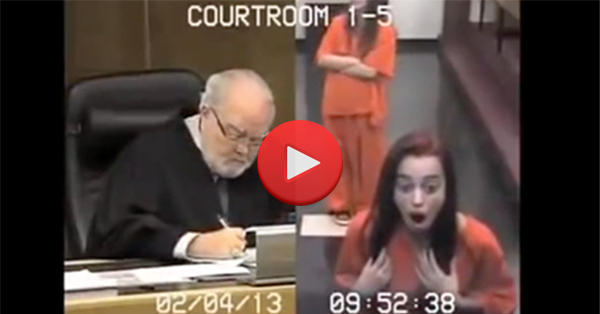 This has to be one of the most epic courtroom scenes we’ve ever seen. When defendant, Penelope Soto, appears before the judge in Miami, FL regarding the charge of being in possession of illegal drugs, she gets herself into much more trouble than she was originally in.

It’s so sad that its honestly comical. Soto is clearly clueless, but whether that is due to being a spoiled brat or because she might be high is unclear. Either way, the judge set her straight and it’s really kind of thrilling to watch.

Adios Ms. Soto! Disrespect from authority like that will get you NOWHERE.

In the followup video, the girl is seen three days later crying and apologizing in court. The judge, who evidently doesn’t do this often, releases her from jail to go to a clinic for treatment. She admits to taking two Xanax on Sunday. He tells her she is an addict and that is what brought her to his court. He also admonishes her on profanity. I really like this judge. You know who I felt sorry for though? Not the ditzy drug addict… her mother. Her parents and sister were in court as the judge spoke with her and her mother was crying. Her heart was broken over this and she felt humiliated. Shame on her daughter for her behavior and hurting her family so. I hope she learned her lesson and turned her life around – kind of doubt it though.